Sunny Skies over the Pacific Northwest 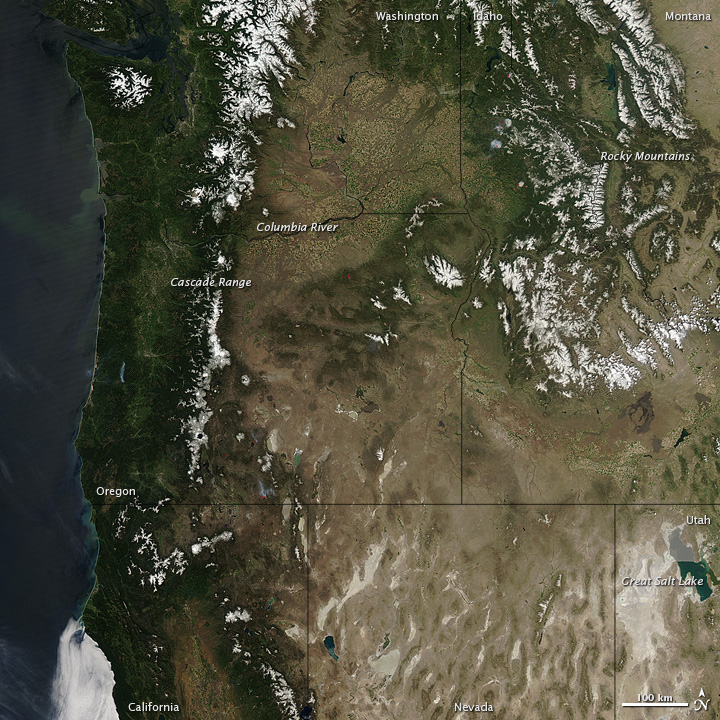 On May 12, 2012, clear skies allowed the Moderate Resolution Imaging Spectroradiometer (MODIS) on NASA’s Aqua satellite an unobstructed view of the Pacific Northwest from Washington to Utah. This natural-color image shows the varied landscape features of that region.

Snow caps the peaks of the Rocky Mountains, the Cascades, and isolated mountains outside these ranges. Snow cover recedes in these mountain ranges as summer progresses, but some peaks sport ice year round, and both the Cascades and the Rockies are home to multiple glaciers.

West of the Cascades, a well-vegetated coastal plain stretches toward the Pacific Ocean. Separating Washington and Oregon, the Columbia River meanders through the relatively arid interior and coastal plain, en route to the ocean. To the south, the landscape of Nevada and Utah is especially arid, with north-south mountains separated by dry valleys. In the southeast, the two-toned Great Salt Lake sprawls over northern Utah, immediately east of the Great Salt Lake Desert, which provides particulate matter for occasional dust storms.

Isolated fires, indicated in this image by red dots, burned throughout the region on May 12, some of them sending smoke plumes northward. The cloud-free skies over the western United States proved short lived. Within a couple days, clouds pushed eastward from the Pacific Ocean. The LANCE MODIS Rapid Response Team provides twice-daily images of this region.

On May 12, 2012, clear skies allowed an unobstructed view of the Pacific Northwest from space.