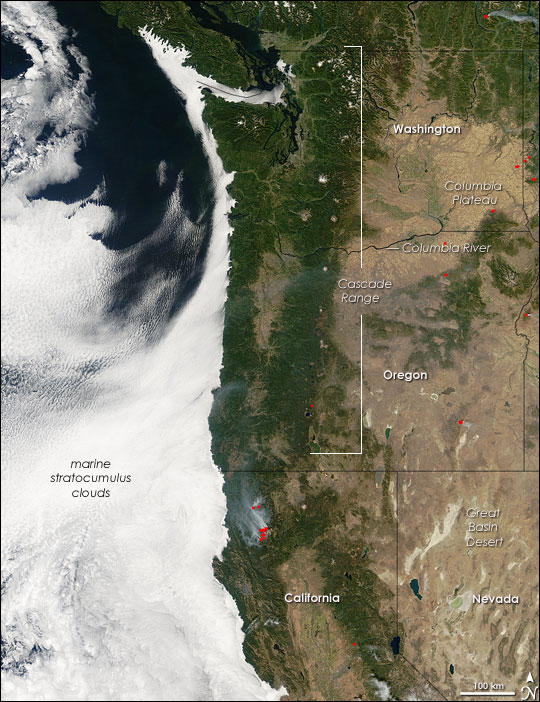 Like milk spilled over a cracked table, a smooth layer of low-lying clouds seeps into the bays, low-lying coves, and waterways of the northwestern United States in this image captured by the Moderate Resolution Imaging Spectroradiometer (MODIS) on NASA’s Aqua satellite on September 29, 2006. Lining the coast, the evergreen-forested Coast Ranges hold the clouds back so that skies over the Pacific Northwest are clear. The stunning contrast between cloudy and clear skies is driven by nothing less than the Earth’s rotation.

As the Earth spins on its axis, the movement pushes ocean surface waters west away from the western edge of continents. In a process called upwelling, cool water from deep in the ocean rises to replace the surface water. Upwelling creates a layer of cool water at the surface, which cools the air immediately above the water. As the moist, marine air cools, water vapor condenses into water droplets, and low clouds form. These lumpy, sheet-like clouds are marine stratocumulus clouds, and they are a common occurrence along the western coasts of the continents, where upwelling is common. Probably no higher than a kilometer (about 3,000 feet) above the Earth’s surface, the clouds in the image hug the coastline in echo of the cool ocean currents beneath them. In contrast, warm, dry air dominates over land, keeping skies cloud free.

At the time of this image, several fires (marked with red boxes) burned in the western United States. The largest of the fires was the Bar Complex fire in Northern California. The only cloud or aerosol readily visible in the Pacific Northwest, smoke from the fire extends north into Oregon. The fire is burning in the Coast Ranges, which extend along the North American continental margin. Separated from the Coast Ranges by tan and pale green valleys, the Cascade Mountain Range runs north-south through Washington, Oregon, and Northern California and is accented by circular, treeless volcanic peaks.

Moving east, the forest-covered mountains give way to sagebrush and grass-covered desert. The two ranges to the west effectively block rainfall from the high Columbia Plateau in Washington and Oregon and the Great Basin Desert in Nevada and southern Oregon. Speckles of light green, most obvious in eastern Washington and central California, are irrigated agricultural lands. The Seattle and Portland urban areas are tiny cement-grey spots along the Puget Sound and the Columbia River, respectively.

The large image provided above is at MODIS’ maximum resolution of 250 meters per pixel. The image is available in additional resolutions from the MODIS Rapid Response Team.