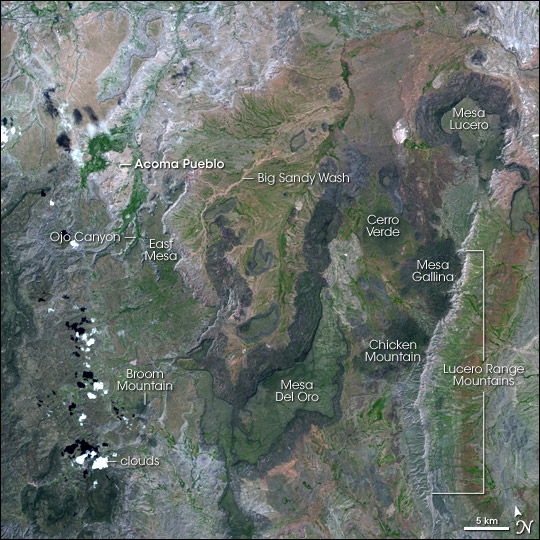 Mountains and mesas punctuate the landscape of western New Mexico. This image from the Advanced Spaceborne Thermal Emission and Reflection Radiometer (ASTER) instrument on board NASA’s Terra satellite shows the rugged, remote terrain southwest of Albuquerque. Mountains with deeply carved slopes and mesas ringed with volcanic rock rise up above the surrounding flat terrain. Vegetation is green, while bare rock shows up in various colors, from silvery-gray, to pink, to purple.

The dark, volcanic rock (basalts) on the cliff faces of some of the mesas creates an optical illusion that the high mesas are actually depressions—an illusion enhanced by the shadows the mesas cast to their northwest. Nearer to the upper left of the scene, several sandstone mesas are less distinct, their edges traced by light-colored lines. North of the much larger East Mesa, a relatively small sandstone mesa is home to Acoma Pueblo, a village built by the ancestors of the American Pueblo Indians centuries ago. Atop the sheer-walled mesa, the village offered an excellent defensive position: a 360-degree view of the surroundings and cliffs that could only be scaled by means of hand-carved stairs that often passed through narrow crevasses and sometimes consisted of little more than hand- and footholds carved in the rock.

In eastern Siberia, a perfect circle of rock contrasts with the surrounding topography. The 6-kilometer- (3.7-mile-) wide ring looks like an impact crater, or the caldera of an extinct volcano, but it is neither. Kondyor Massif was formed by the intrusion of igneous, or volcanic, rock that pushed up through overlying layers of sedimentary rock, some of them laid down more than a billion years ago.