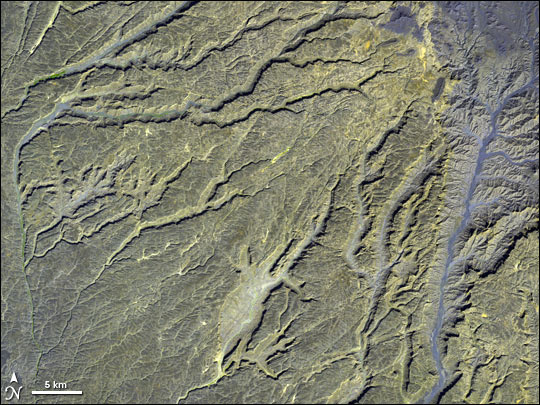 In photo-like satellite images, the Tibesti Volcanic Range in northwestern Chad makes a dark splash against the pale tan and orange landscape of the surrounding Sahara Desert. Here, non-visible wavelengths of light detected by the Advanced Spaceborne Thermal Emission and Reflection Radiometer (ASTER) on NASA’s Terra satellite have been added to an image captured on January 12, 2003. The enhancement makes the intricate carving of dozens of canyons along the southwest slope of an extinct volcano more obvious. The slopes appear yellowish-brown, while the canyons appears paler, occasionally tinted with blue-violet, which is not water, but rather rock or soil with a different composition than the surrounding rock.

The canyons play a bit of a trick on the eye, giving the impression that they are descending from southwest to northeast (lower left to upper right). This illusion is created by the fact the canyons are wider upslope than they are downslope, which is not what we usually expect to see in rivers running down mountains. In reality, the higher elevations in this scene are at upper right, where the rim of a broad, ancient caldera has crumbled away, leaving theater-like canyons to descend down the slopes. The crumbling caldera is adjacent to Yega Caldera, to its north.

The layer of rock on the surface of these volcanic formations is made mostly of ignimbrites. Ignimbrites are a relatively soft rock type, made from pumice (frothy, lightweight rock) and ash deposited during eruptions. In this area, these ignimbrites have eroded from groundwater seepage and surface run off, likely in periods where the climate of the region was wetter than it is now. Beneath the softer layer lies a much harder rock, basement schist. When geologists use the term “basement” to describe a rock layer, they are usually talking about the thick, ancient rock layer that forms the crust of continents. Schist is a metamorphic rock, rock that has changed form due to extreme heat or pressure.