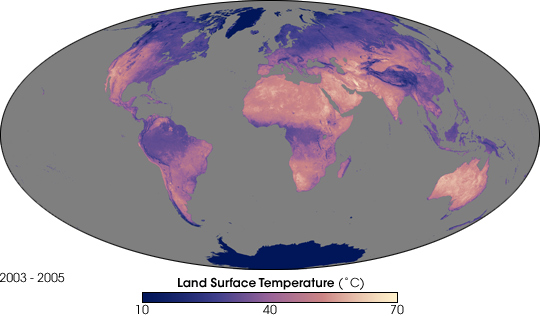 Where is the hottest place on Earth? Temperature records from weather stations give that distinction to El Azizia, Libya, which hit a sweltering 57.8 degrees Celsius (136 F) on September 13, 1922, but there have likely been hotter locations beyond the scattered network of weather stations. This image provides a more complete picture of the Earth’s temperature. The image was created from data collected by the Moderate Resolution Imaging Spectroradiometer (MODIS) on NASA’s Aqua satellite, which flies overhead at about 1:30 p.m. local time, close to the hottest part of the day. MODIS records land surface temperatures, which reflect how hot the ground is to the touch. As anyone who has walked barefoot across a sandy beach or a slab of concrete on a summer’s day can attest, the land underfoot is hotter than the air at head level. As a result, the temperatures shown here could be as much as 40 degrees Celsius hotter than the air temperatures recorded at weather stations.

This image shows the hottest land surface temperature MODIS recorded at each location on Earth between 2003 and 2005. Not surprisingly, the hottest places, shown in light pink, are barren or sparsely vegetated deserts. These areas dominate northern Africa, southern Asia, Australia, and parts of western North and South America. Densely vegetated areas such as the Amazon and Congo rain forests of South America and Africa and the boreal forests of North America and Eurasia are much cooler, showing up as purple. Cooler yet, in blue, are high elevations like the Tibetan Plateau and mountain ranges. The coldest locations are the ice-capped lands near the North and South Poles. Where is the hottest place on Earth? According to MODIS, the hottest place in 2004 and 2005 was the Lut desert of Iran, which reached 70.7 degrees C (159 degrees F). In 2003, Queensland, Australia, was the hottest place on Earth, with a temperature of 69.3 degrees C (157 degrees F).

Beyond providing interesting trivia, this type of image can help scientists track land cover change. Forests are much cooler than cleared land, so if a forest is cut down, the land surface temperature will go up. This can be seen in the Amazon, where squares of warmer pink intrude into the cool purple along the southern boundary of the forest. In other locations, irrigated crops are cooler than natural vegetation because they have more water to draw upon, and cool themselves through evaporation. This type of land cover-temperature analysis could, therefore, reveal the extent of irrigated agriculture and deforestation world wide.

Image of the Day Heat Land World of Change