The traditional way to measure temperatures on Earth is with a thermometer, and the World Meteorological Organization, the U.S. National Weather Service, and other scientific institutions have established some very specific guidelines for how to do it. The air temperatures reported by your local meteorologist are measured by a thermometer situated 1.2 to 2 meters off the ground and shielded from direct sun. However, it cannot be measured in the shade of a building, mountain, or tree.

But air temperatures are just one way to think about how the Earth is warmed by the Sun and the atmosphere. Scientists are also interested in land “skin” temperature (LST), a measure of direct heating of the land surface, where the Sun’s rays are absorbed and re-emitted. LSTs are often significantly hotter than air temperatures, and if you’ve ever walked barefoot across hot sand or pavement on a summer day, you know the difference. The surface beneath your feet feels much hotter than the air around your head.

The map above shows global maximum land surface (or skin) temperatures from 2003 to 2009, as measured by the Moderate Resolution Imaging Spectroradiometer (MODIS) onboard NASA’s Terra and Aqua satellites. Below the image, click on the links to view an animation showing the different maximum temperatures for each year.

The MODIS instrument has 36 different spectral bands (groups of wavelengths), including some that detect thermal radiance, or the amount of infrared energy emitted by the land surface. Since the two MODIS instruments scan the entire surface each day, they provide a complete picture of earthly temperatures and fill in the gaps between the world’s weather stations—particularly in extreme environments where temperatures are simply not measured. These land skin temperature measurements have helped scientists from the University of Montana pinpoint the hottest places in the world.

But the Lut Desert was not the hottest every year. In 2003, the satellites recorded a temperature of 69.3°C (156.7°F)—the second highest in the seven-year analysis—in the badlands of Queensland, Australia. And in 2008, the yearly maximum temperature of 66.8°C (152.2°F) was recorded in the Turpan Basin of the Taklimakan Desert in China.

The difference between air temperatures and land skin temperatures is a result of how heat is transferred and transmitted. Air temperatures are moderated by circulation—both the rising and sinking of air masses into the atmosphere, and the horizontal movement of winds across the landscape. Moisture also regulates how much heat can be stored in the air. On the other hand, land skin temperatures reflect the direct heating of a parcel of ground by radiation from the sun, the atmosphere, and other heat flows. Therefore, the hottest LSTs are likely to occur where the skies are clear, the soil is dry, the winds are light, and the ground absorbs most light and reflects little&mdsashthat is, has a low albedo. Rocky deserts offer the perfect combination.

To learn more about how scientists measure Earth’s temperatures, read our latest feature: “Where is the Hottest Place on Earth?” 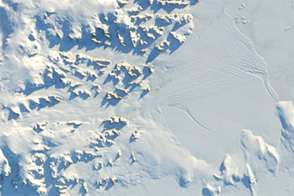