Sunny Skies over the Antarctic Peninsula 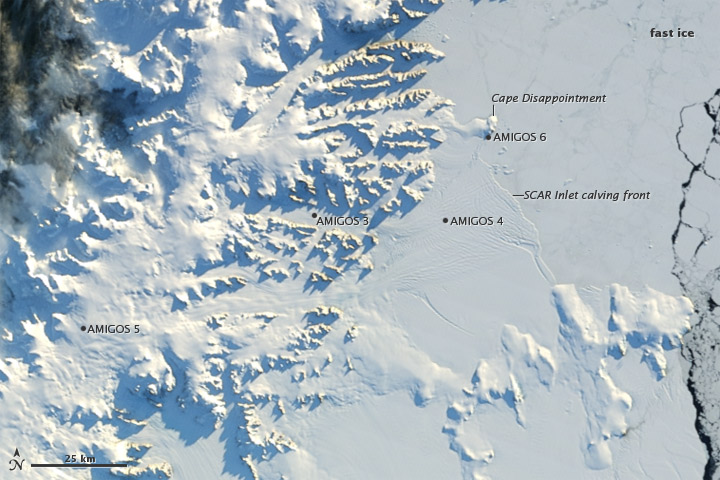 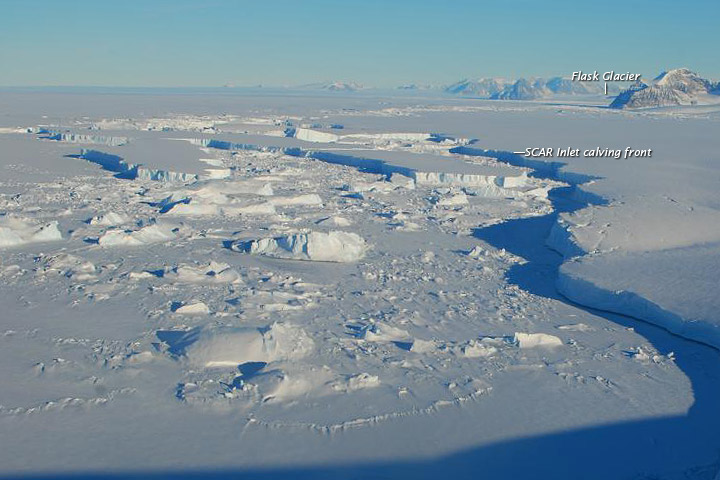 Sunny skies and westerly winds prevailed over the Antarctic Peninsula on April 24, 2012. Cloudy weather had just moved out, and temperatures rose well above freezing as the Moderate Resolution Imaging Spectroradiometer (MODIS) on NASA’s Terra satellite passed overhead and captured a natural-color image (top).

The relatively warm conditions on the peninsula in late April 2012 were driven in part by warm downslope winds, known as Chinook or foehn winds, that were channeled through valleys such as the one holding the Flask Glacier. Such winds can lead to extensive melt in the summer.

Scientists can access timely weather information from the Antarctic Peninsula thanks to a group of remote, satellite-linked weather stations known as the Automated Met-Ice-Geophysics Observation System (AMIGOS). Deployed in 2010–11, AMIGOS stations are part of a National Science Foundation-funded project to study environmental change in the rapidly changing area around the Larsen Ice Shelf. Each station is equipped with a thermometer, instruments to measure wind speed and direction, and a camera to photograph its surroundings. Stations installed on the flowing ice have also been equipped with global positioning system (GPS) receivers to track changes in flow speed.

Glaciologists have good reason to watch the Antarctic Peninsula. In 2002, the massive Larsen B ice shelf disintegrated in a matter of weeks. The calving front at the SCAR Inlet is the remaining fragment of that much larger shelf. (The inlet is named for the Scientific Committee on Antarctic Research.)

Temperature and wind conditions in late April 2012 came from the AMIGOS 3 station on Flask Glacier, and the AMIGOS 6 station at Cape Disappointment. The second image above is a photo taken by AMIGOS 6 on April 24 and relayed to a satellite the same day. The view is toward the south, showing part of the SCAR Inlet calving front. The Flask Glacier appears in the distance.

As of April 2012, the AMIGOS 1 station was set for deployment on a future expedition. The AMIGOS 2 station, a prototype, was operating on the roof of the National Snow and Ice Data Center in Boulder, Colorado. Located on the stormy ridge of the crest of the Peninsula, the AMIGOS 5 station stopped sending data after seven months, being completely buried by roughly 6 meters (20 feet) of snow.

Although conditions were relatively warm on April 24, cool conditions prevailed on the Peninsula in the months preceding this image—much cooler than the conditions prior to the Larsen B Ice Shelf disintegration in 2002. The fast ice filling the area of the SCAR Inlet was evidence that conditions were cooler than normal. That ice remained in place through the austral summer of 2011–12. Meanwhile, summer melt ponds, thought to contribute to the breakup of the Larsen B Ice Shelf, were scarce from 2010 to 2012.

Acquired April 24, 2012, these images show part of the Antarctic Peninsula, enjoying sunny skies and warm temperatures after a bout of cloudy weather.