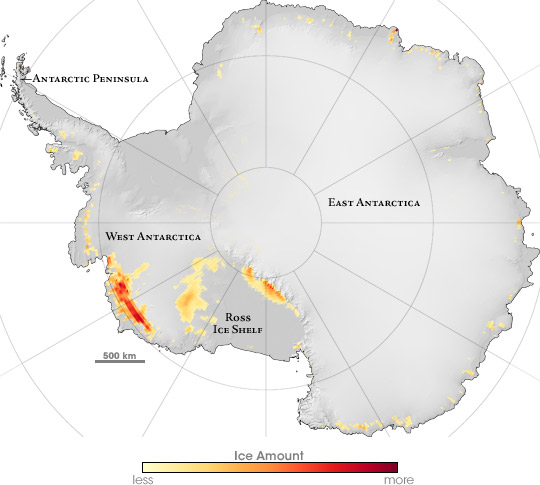 In contrast to the Antarctic Peninsula, where evidence of climate warming has been evident in rising temperatures, retreating glaciers, and collapsing ice shelves, the interior of Antarctica has generally appeared to be staying well below freezing. In May 2007, however, a team of researches from NASA and the University of Colorado found evidence of warming and melting as much as 900 kilometers (500 miles) inland. Just 500 kilometers (310 miles) from the South Pole, and more than 2,000 meters (6,600 feet) above sea level, portions of Antarctica’s interior experienced temperatures above freezing for about a week in January 2005.

The areas where snow melted and then refroze as ice over the winter were detected by NASA’s Quick Scatterometer (QuikSCAT). In this image, areas where QuikSCAT detected more ice are red, and places where it detected less ice are yellow. Small patches of yellow and red around the coastline of East Antarctica show that at least some melting took place there, but the most significant amounts of ice formed in West Antarctica. QuikSCAT detected significant amounts of melting along a stretch of the West Antarctic coastline more than 500 kilometers (310 miles) long. Additional evidence of melting appeared as a ring of icy patches surrounding the Ross Ice Shelf.

Son Nghiem of NASA’s Jet Propulsion Laboratory, one of the scientists who conducted the research, said that the changes were much more dramatic than simply a moistening or softening of the snow. The melting produced liquid water that refroze when temperatures dropped. In some cases, the water found weak spots in the snow pack and ran vertically down through the ice sheet, refreezing as columns of ice. In other cases, where the snow pack beneath was firmer, the liquid water would have pooled on the surface, refreezing in a lens shape. Smaller pockets of water and cemented snow formed clumps of ice scattered throughout the snow. Quickscat bounces radar pulses off the Earth’s surface and measures the energy that returns to the satellite. Ice reflects radar energy differently than snow, enabling QuikSCAT to detect areas that have melted and refrozen, even after they are re-covered with snow.

In total, the areas in Antarctica that underwent melting in January 2005 amounted to an area the size of California. Melt water that does not refreeze may flow to the bottom of an ice sheet and lubricate its underside, causing the ice sheet to slide toward the ocean more quickly. Although the melting in January 2005 was intense enough to create a large area of re-frozen ice, it did not appear to be strong enough to have sent melt water all the way to sea. No further melting was detected through March 2007.

NASA image by Robert Simmon and Jesse Allen, based on data from Son Nghiem and the QuikSCAT science team, Jet Propulsion Laboratory.

In May 2007, a team of researchers found evidence of warming and melting as much as 900 kilometers into Antarctica.