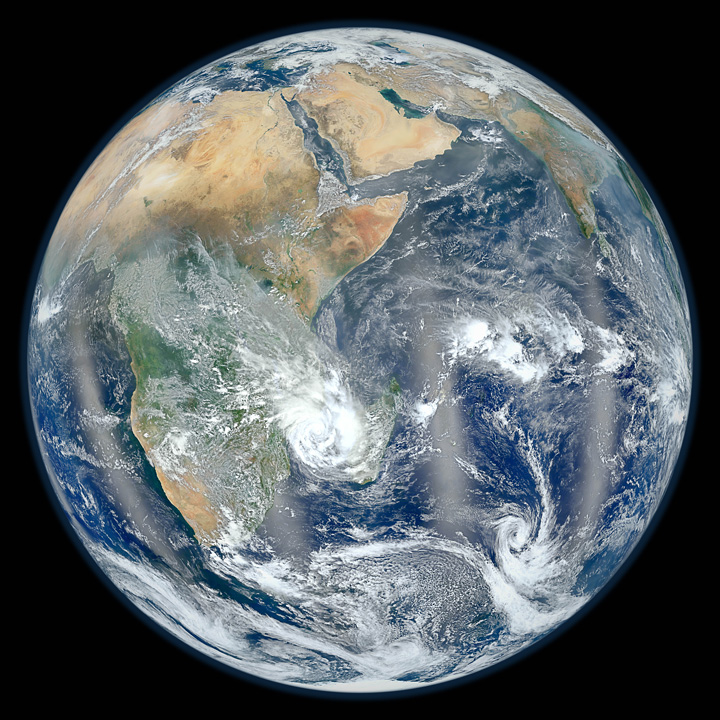 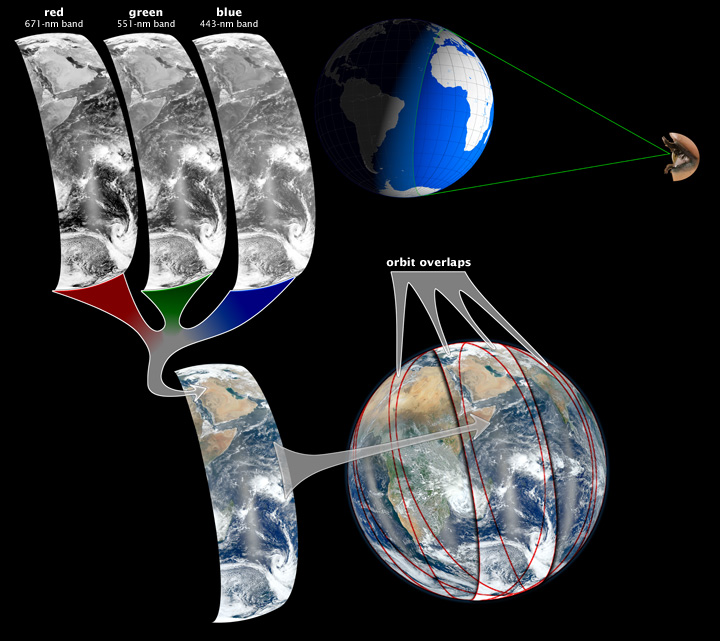 People love images of the full disk of Earth as it would appear from space. In the last week of January 2012, one of our NASA science colleagues, Norman Kuring, took some fresh data from the newest Earth-observing satellite, projected it on a disk, and voila...three million people viewed the image in a week. The wave of interest is still spreading across the Internet and social media.

Have you ever considered how these images get made? The image above, of Earth’s eastern hemisphere, was built from data collected by the Suomi NPP satellite, which flies in a polar orbit at an altitude of 824 kilometers (512 miles). The perspective of this new image, however, is from 12,743 kilometers (7,918 miles) above a point at 10 degrees South latitude and 45 degrees East longitude.

Kuring managed to “step back” from Earth by combining data from six separate orbits Suomi NPP made on January 23, 2012. The natural-color images come from the Visible Infrared Imaging Radiometer Suite (VIIRS) on the satellite. The four vertical lines of haze are caused by sunglint, the reflection of sunlight off the ocean.

The graphic above illustrates how separate images in red, green, and blue wavelengths are combined to make natural-color imagery, and how multiple, adjacent swaths—slices of Earth viewed on each satellite pass—get built into a composite. The width of the swaths covered by each pass of VIIRS is about 3,001 kilometers (1,865 miles).

A decade ago, members of the Earth Observatory team pulled together about 10,000 satellite scenes collected over 100 days, and created a 43,200-pixel by 21,600-pixel map of the Earth. By 2007, the resolution of this full Earth “Blue Marble” was up to 86,400 pixels by 43,200 pixels. Even after all of these years, the Blue Marble is still the most popular and most downloaded image on our site.

Of course, the original Blue Marble image is actually a photograph—not a composite view. It was taken by the Apollo 17 astronauts as they traveled to the Moon. The view is from a distance of about 45,000 kilometers (28,000 miles).

Image by NASA/NOAA. Caption by Aries Keck and Mike Carlowicz. Suomi NPP is the result of a partnership between NASA, NOAA and the Department of Defense.