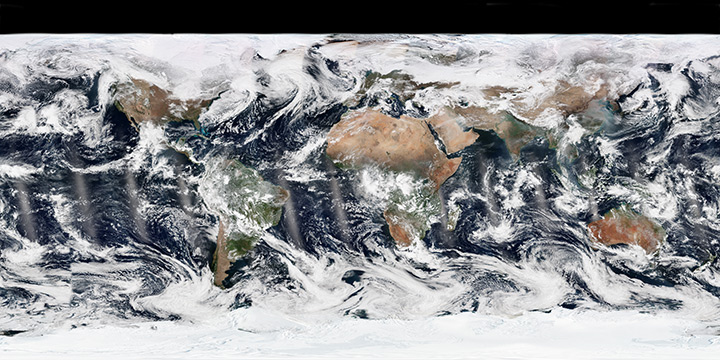 In the decade before the first Earth Day, our view of the planet was still fuzzy. Scientists and engineers of the 1960s were experimenting with satellites to see if and how they could be useful for meteorology and Earth science. Early space imagers were similar to black-and-white television cameras, and the resolution was crude because engineers were still figuring out how to gather, compress, and send data with radio signals.

One giant leap for satellites came in 1965. One month after the launch of the ninth Television Infrared Observation Satellite (TIROS-IX), researchers from NASA, RCA, and the U.S. Weather Bureau assembled 450 satellite photos into the first global composite view of Earth. The image at the top of this page shows the cloud cover of the entire planet as it appeared to TIROS-IX on February 13, 1965. The satellite circled the Earth every two hours in a polar orbit and used its two cameras to collect 40 images of the sunlit side on each pass. The images were sent by radio signals to ground stations in Virginia and Alaska, then relayed and assembled in Washington, D.C.

In a 1968 NASA history of early observations of Earth, the authors described the scene:

A tropical storm can be seen over Ceylon and the southern tip of India, and another is over the south Indian Ocean. In the lower right, a storm is approaching the southern coast of Australia...The thin band of clouds extending from central North Africa across the Red Sea to Saudi Arabia indicates the location of the jet stream...The remnants of an old storm are indicated by the comma-shaped cloud array over the North Atlantic Ocean...A strong weather front is depicted by the clouds extending across the southeastern United States; another storm is moving into the northwestern United States from Canada.

The importance of this picture lies in the fact that it provides the meteorologist with weather information over the entire Earth, whereas conventional observations before satellites provided information on less than 20 percent of the Earth’s atmosphere.

Fifty years later, NASA and NOAA (the successor to the Weather Bureau) captured a global composite of Earth with the Visible Infrared Imaging Radiometer Suite (VIIRS) on the Suomi NPP satellite. The natural-color image was acquired on February 13, 2015, exactly 50 years after the TIROS IX composite. Unlike the 1965 effort, the modern composite is almost routine. Global composites are made daily, with computer tools fitting together fourteen 3,000-kilometer wide swaths of the planet that are collected each day. It has taken a lot of effort through multiple generations of satellites—and engineers, scientists, data handlers, and hardware builders—to get from grainy black-and-whites stitched by hand to daily, color coverage.

“Over the years, the role of satellites in describing the Earth system in all of its glory and complexity has become clear,” said Jack Kaye, associate director for research in NASA’s Earth Science Division. “Our ability to quantitatively document the many components of the Earth system and how they vary with time and space is one of the great scientific accomplishments of our time. We have the ability to look at all parts of our planet—atmosphere, ocean, ice, and land surface—and watch them evolve.”

“With the research carried out by the scientific community, we can understand how these components work with each other,” Kaye added. “We are thus better positioned to provide information about Earth’s evolution, not just for scientists, but for all the world’s citizens, governments, and businesses who have to make environmentally-based decisions for the future.”

Click here to learn more about how NASA is celebrating Earth Day with social media and live public events.

TIROS IX image by NASA. NASA Earth Observatory image by Jesse Allen, using VIIRS data from the Suomi National Polar-orbiting Partnership. Suomi NPP is the result of a partnership between NASA, the National Oceanic and Atmospheric Administration, and the Department of Defense. Caption by Mike Carlowicz.