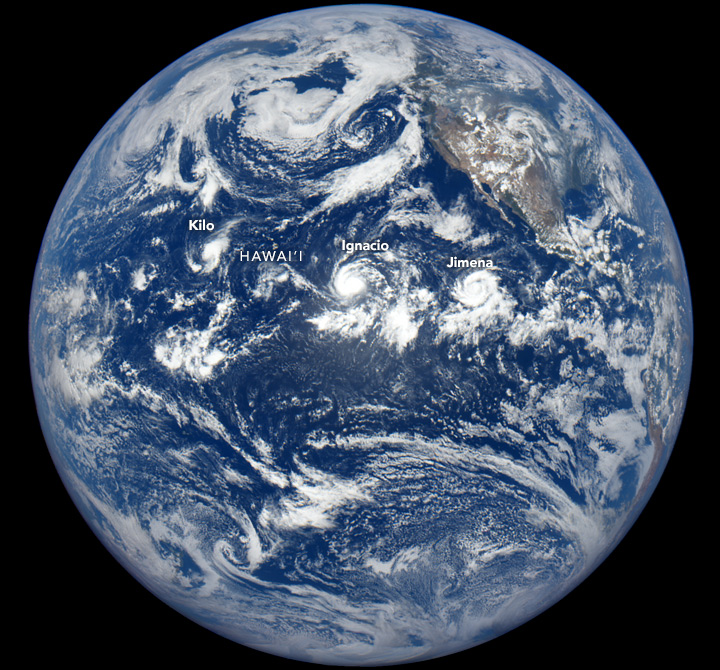 From dust streaming across the Atlantic Ocean to daily views of clouds at sunrise, a new NASA camera is keeping a steady eye on the sunlit side of Earth.

NASA’s Earth Polychromatic Imaging Camera (EPIC) on NOAA’s Deep Space Climate Observatory (DSCOVR) orbits Earth from a distance of about 1.5 million kilometers (1 million miles). From this distance, it offers a new view of clouds, land surfaces, aerosols, and more. Scientists presented some of their reactions and analyses of the first EPIC images on December at a media briefing at the annual meeting of the American Geophysical Union.

EPIC captures a color image of the sunlit side of Earth at least once every two hours, allowing researchers to track features as the planet rotates in the instrument’s field of view. “With EPIC, you see cloud structure from sunrise on the left to sunset on the right,”said Jay Herman, EPIC instrument lead investigator at NASA Goddard Space Flight Center and the University of Maryland, Baltimore County. “It’s the only view we have like this where everything is at the exact same instant in time, even though the local times are different.”

EPIC acquired the image above on August 26, 2015, when a trio of hurricanes marched across the Pacific Ocean. The still image is one of 22 scenes in the animation below, which shows Earth over one full day. Images were acquired with light from the visible spectrum—similar to what human eyes would see.

In addition to the visible wavelengths, EPIC also takes measurements in the ultraviolet and near-infrared. With the ultraviolet channels, Herman can watch as dust from the Sahara as it blows westward to the Americas. While satellites in low-Earth orbit can pick this up at a fixed time, EPIC provides a day-long view of the process. “We can see the progression as it flows across the Atlantic,” Herman said.

Researchers also can determine the height and location of daytime clouds by comparing EPIC images at two different wavelengths. This measurement is important for calculating Earth’s energy balance, as well as for tracking weather.

“Because of the unique location and the unique field of view, every day brings something new and unexpected,” said Alexander Marshak, DSCOVR deputy project scientist at NASA Goddard. For example, it was a surprise—from a million miles away—to see the cloud plumes that ships can make as they cross the ocean.

EPIC’s unique location and field of view have also turned up some stunning views of the Moon. In July 2015, EPIC captured a fully illuminated view of the “dark side” of the Moon that is not visible from Earth. Then, on September 27, 2015, it captured an early look at a lunar eclipse. The second animation above shows Earth as it moved in front of the moon about four hours before the eclipse was visible from Earth. The reason for the time offset is because EPIC is positioned slightly off from the Earth-Sun line.