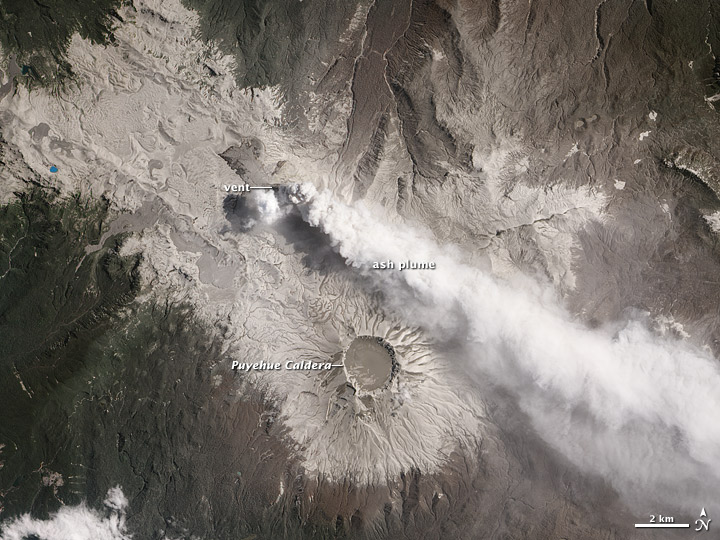 Eight months of ceaseless activity have covered the landscape around Chile’s Puyehue Cordón Caulle Volcanic Complex in ash. The light-colored ash appears most clearly on the rocky, alpine slopes surrounding the active vent and Puyehue’s 2,236 meter (7,336 foot)-tall caldera. Within the caldera, the ash appears slightly darker, possibly because it may be resting on wet snow that is melting and ponding in the South American summer.

The ash plume blows towards the southeast due to the prevailing winds. According to Chile’s Servicio Nacional de GeologÃ­a y MinerÃ­a (SERNAGEOMIN), plumes in the past week have reached two to four kilometers in altitude and have drifted 90 to 320 kilometers downwind.

Evergreen forests on the east side of the volcano have been damaged by months of nearly continuous ashfall, and are now an unhealthy brown. Forests to the west have only received intermittent coatings of ash and appear relatively healthy. The government of Chile has declared an agricultural emergency for the Los Rios region due to the destruction caused by ash falls. The Argentine government did the same for the farmlands and resort areas in Chubut, Neuquen, and Rio Negro. Airborne ash also continues to cause disruptions of air travel through the region and to Patagonia.

This natural-color image was acquired on January 26, 2012, by the Advanced Land Imager (ALI) aboard the Earth Observing-1 (EO-1) satellite. In the false-color image acquired the same day, heat from the active vent colors it bright red. Just to the west of the vent, a blue-white cloud may indicate outgassing from the slowly-growing lava flow.

As the eruption continues into its eighth month, ash has coated and damaged the forest downwind of the volcano plume.

Acquired in late December 2011, this image shows a volcanic plume pouring out of a fissure on the slope of Chile’s Puyehue-Cordón Caulle Volcano.