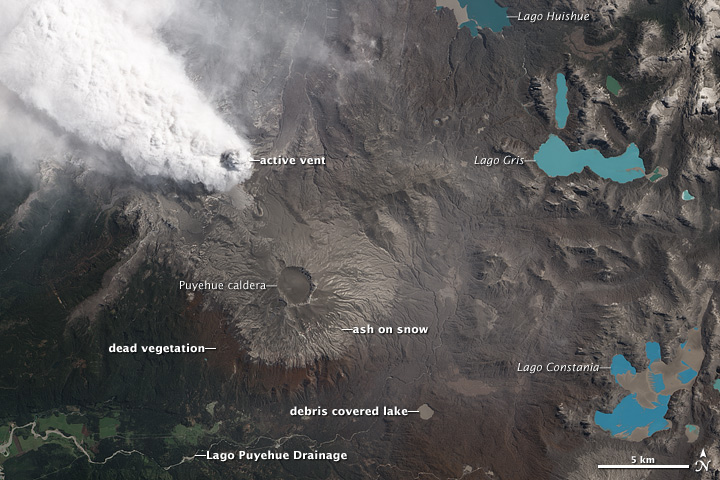 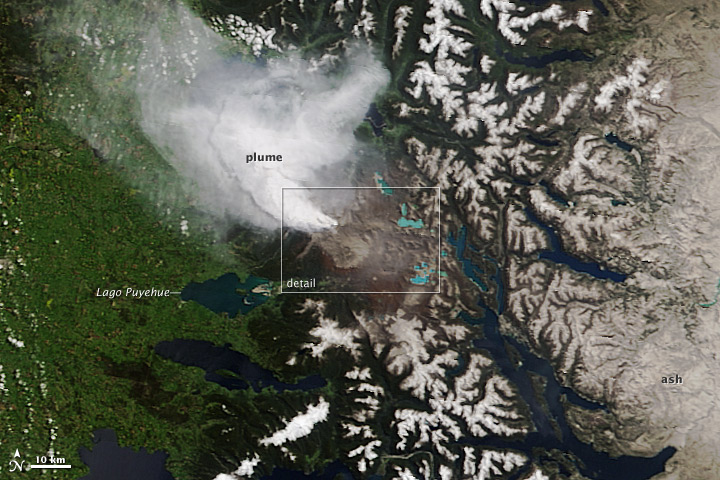 The eruption at Chile’s Puyehue-Cordón Caulle continued in late October 2011. The plume was much smaller than during the opening phases of the eruption (in early June), topping out at about 4.5 kilometers (2.8 miles). However, high atmospheric winds are carrying the ash away and disrupting air travel throughout the region. Depending on the wind, ash from Puyehue-Cordón Caulle is being carried as much as 120–250 kilometers (75–160 miles) from the vent.

This pair of natural-color images were taken on the morning of October 22, 2011. The top picture is a high-resolution view acquired by the Advanced Land Imager (ALI) aboard the Earth Observing-1 (EO-1) satellite. A wider perspective is shown in the lower picture, acquired by the Moderate Resolution Imaging Spectroradiometer (MODIS) on Terra.

The hazard from ash and tephra (solid material ejected by a volcano) dosn’t end with the moment of eruption. These images show the accumulation of ash and tephra on the waterways around Puyehue-Cordón Caulle, especially Lago Huishue, Gris, and Constania on the eastern (right) side of the image. Some smaller lakes are completely covered in volcanic debris. Rainfall and snowmelt can easily move the ash deposits into nearby river and stream beds, producing small mudflows (called lahars) that carry debris even further away. The stream valley in the lower left of the image is grey with ash and volcanic debris that can be seen entering Lago Puyehue in the lower image. These accumulations of volcanic debris will likely be remobilized for years to decades after the eruption ends.

The wide perspective in the lower image shows Puyehue Cordón-Caulle’s ash plume blowing to the northwest; however, prevailing winds usually carry the ash to the east. Nearly five months of activity has covered the high plains of Argentina in gray ash. High winds can lift this ash back into the air, occasionally disrupting air travel in Argentina and Uruguay. 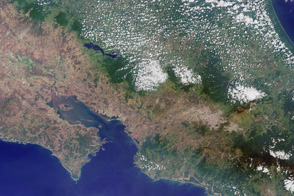 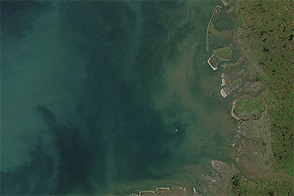 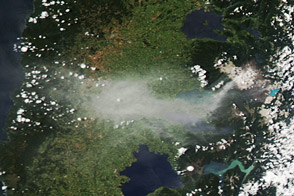