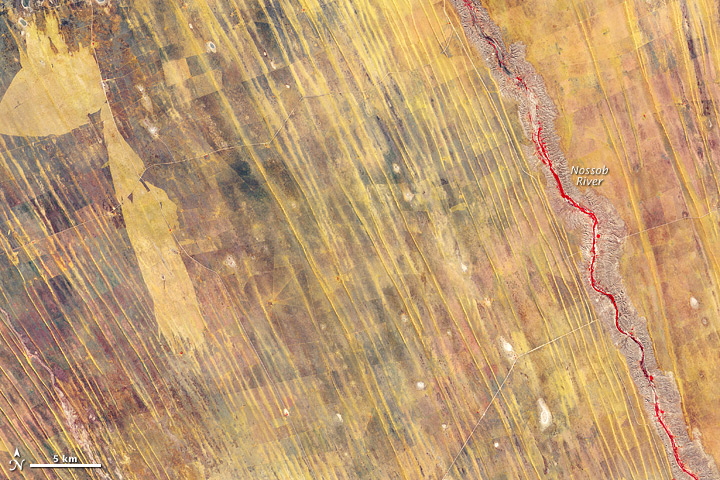 The Namib Desert may be the best-known desert in Namibia, but it is not the only one. Eastern Namibia is also dry, though slightly less so. This part of the country holds part of the expansive Kalahari Desert, home to some visually striking dunes.

The long, thin, diagonal stripes are linear dunes, which occur along the southwestern margin of the Kalahari Desert. Linear dunes typically form in arid environments with consistent wind patterns. Research conducted in the 1980s and 1990s found that current climatic conditions in this region are not conducive to the formation of an extensive dune system. Wind direction varies too much, and vegetation, although sparse, is abundant enough to inhibit the movement of sand. By drilling into the dunes and examining sediment samples, researchers concluded that the dunes likely formed between 17,000 and 10,000 years ago. Another dune-forming period may have occurred between 28,000 and 23,000 years ago.

Although conditions no longer support the development of new dunes, some sand movement does occur, particularly along the crests. Compared to conditions 10,000 years ago, however, wind speeds are low and vegetation—nurtured by annual precipitation of about 150 to 200 millimeters (6 to 8 inches)—comparatively abundant. 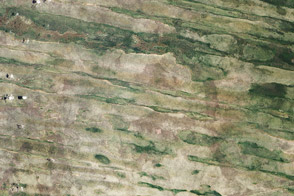 Linear Dunes of the Caprivi Strip

Giant stripes in the Caprivi Strip of northeastern Namibia hint at a very different climate in the region’s past.