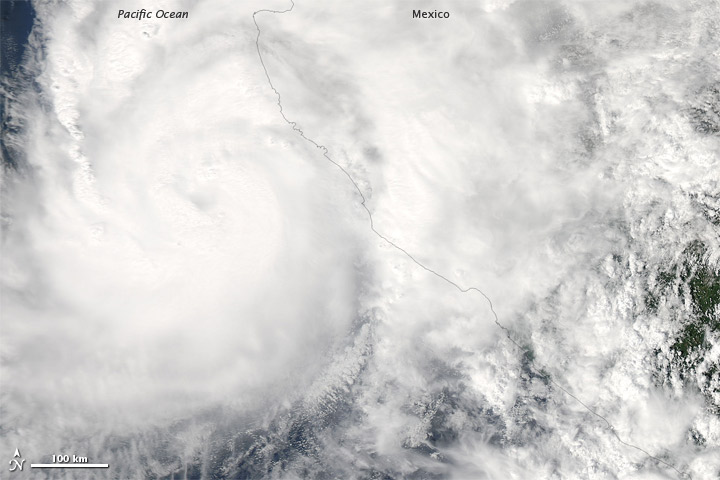 Around 11:00 p.m. Pacific Daylight Time (PDT) on October 11, 2011, Hurricane Jova made landfall along the west coast of Mexico. The storm weakened after coming ashore, and by 8:00 p.m. PDT on October 12, the U.S. National Hurricane Center (NHC) reported that Jova was a remnant low.

Jova was still approaching Mexico’s coast when the Moderate Resolution Imaging Spectroradiometer (MODIS) on NASA’s Aqua satellite captured this natural-color image, at 12:55 p.m. PDT on October 11, 2011. Although the eye remains off the coast, Jova’s clouds stretch hundreds of kilometers inland.

At 2:00 p.m. PDT on October 11, just over an hour after MODIS acquired this image, the NHC reported that Jova was a category 2 hurricane, with maximum sustained winds of 100 miles (160 kilometers) per hour.

Although Jova weakened after making landfall, it was a deadly storm. On October 12, Guadalajara Reporter stated that Jova had killed two people and forced the evacuation of at least 500 more. By October 13, the death toll had risen to five, and the total number evacuated had risen to 2,600, according to USA Today. The storm knocked out power, forced the closure of the port at Manzanillo, and washed out stretches of highway.

Jova strengthened into a tropical storm on October 6, 2011. By October 10, the storm was a powerful hurricane headed for Mexico.