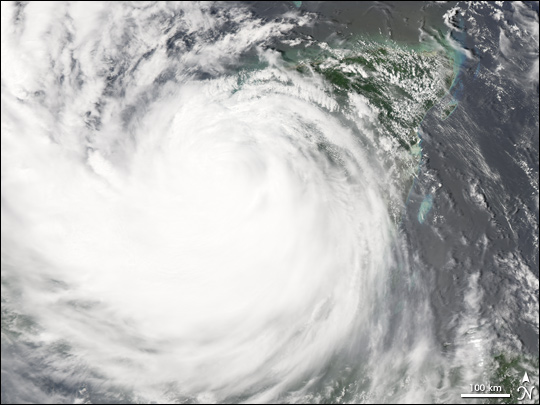 Hurricane Dean was the fourth named storm and the first hurricane of the 2007 Atlantic season. It was also one of the strongest hurricanes ever observed in the Atlantic Basin. Dean reached Category 5 status—the highest rating on the Saffir-Simpson Hurricane Scale—on August 20 as it passed over the deep, warm waters of the Caribbean. When it came ashore on August 21, it was the first storm to make landfall as a Category 5 hurricane in the Atlantic basin since Hurricane Andrew in 1992, said the National Hurricane Center.

At 3:05 p.m. local time on August 21, 2007, the Moderate Resolution Imaging Spectroradiometer (MODIS) flying on NASA’s Aqua satellite captured this image of Hurricane Dean as it reemerged over the Gulf of Mexico after crossing the Yucatan Peninsula. In this image, the peninsula is barely visible northeast of the hurricane. The storm itself has lost the near-perfect shape and distinct eye it displayed on August 20, but it still maintains the tight spiraling clouds typical of a powerful storm.

According to the U.S. National Hurricane Center public advisory issued at 4:00 p.m. central daylight savings time on August 21, the hurricane’s center was located approximately 100 kilometers (60 miles) west-southwest of Campeche, Mexico. The storm was expected to travel westward at about 32 kilometers (20 miles) per hour, passing near the coast, and then move ashore over central Mexico on August 22. Although downgraded to a Category 1 storm, it was expected to re-strengthen before its second landfall.

You can download a 250-meter-resolution KMZ file of Hurricane Dean suitable for use with Google Earth.