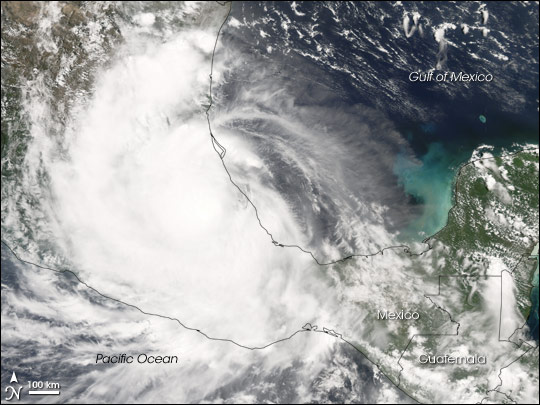 Hurricane Dean lost a considerable fraction of its power as it crossed the Yucatan Peninsula, but it was still a hurricane with powerful winds and very heavy rains when it struck the Mexican coastal state of Veracruz on August 23. The Moderate Resolution Imaging Spectroradiometer (MODIS) flying on NASA’s Aqua satellite captured this image of Hurricane Dean at 3:45 p.m. local time (19:45 UTC) on August 22, 2007, as the storm was plunging inland over Mexico towards the high mountain ranges that form the spine of Mexico. Making landfall with 160-kilometer-per-hour (100-mile-per-hour) sustained winds, Dean lost strength over land.

The storm still possessed the signature spiral structure of a hurricane, but the central eye appeared to be gone by the time MODIS observed the storm. On the right side of the image, the usually dark blue waters of Campeche Sound are pale where Dean’s powerful winds churned up a trail of sand and sediment.

The winds were reduced in strength through this second landfall of Dean, but as with several other notable storms in this area, such as Hurricane Mitch, heavy rain was a major concern. As Dean passed over the mountain ranges, authorities were concerned about the risk of flash floods and mud slides on steep mountain terrain.

Hurricane Dean was the fourth named storm and the first hurricane of the 2007 Atlantic season. It was also one of the strongest hurricanes ever observed in the Atlantic Basin. Dean reached Category 5 status—the highest rating on the Saffir-Simpson Hurricane Scale—on August 20 as it passed over the deep, warm waters of the Caribbean. When it came ashore on August 21, it was the first storm to make landfall as a Category 5 hurricane in the Atlantic basin since Hurricane Andrew in 1992, according to the National Hurricane Center.

You can download a 250-meter-resolution KMZ file of Hurricane Dean suitable for use with Google Earth.