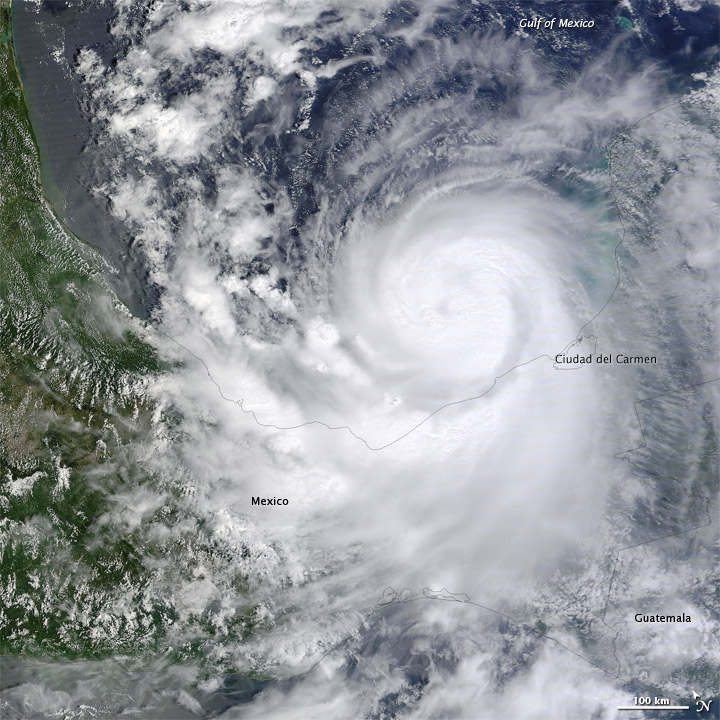 By the morning of September 17, 2010, Hurricane Karl had strengthened to a major (Category 3) hurricane as it approached the Gulf Coast of Mexico. At 7:00 a.m. Central Daylight Time (CDT), the U.S. National Hurricane Center (NHC) reported that Karl was about 50 miles (80 kilometers) northeast of Veracruz, Mexico, and about 150 miles (240 kilometers) southeast of Tuxpan, Mexico. The storm packed maximum sustained winds of 120 miles (195 kilometers) per hour. A hurricane warning was in effect for the coast of Mexico from Veracruz to Cabo Rojo, and a hurricane watch was in effect for the coast of Mexico north of Cabo Rojo to La Cruz.

The Moderate Resolution Imaging Spectroradiometer (MODIS) on NASA’s Terra satellite captured this natural-color image of Hurricane Karl at 12:20 CDT (17:20 UTC) on September 16, 2010. About the time MODIS took this picture, Karl was a Category 2 hurricane, with wind speeds of roughly 100 miles (160 kilometers) per hour, according to the NHC. The storm spread over much southern Mexico—the same area that had already flooded earlier in the month.

On September 17, the NHC warned that some further strengthening of the storm was still possible before Karl made landfall, although the storm was anticipated to weaken as it traveled inland.