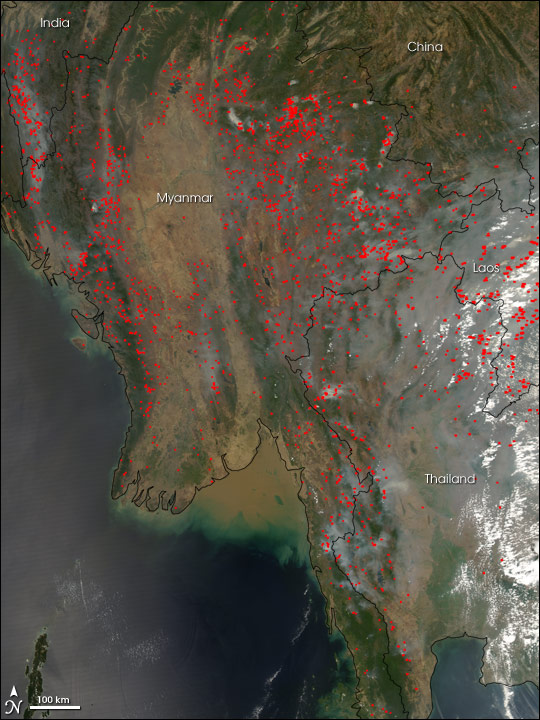 In Southeast Asia, fires are common and widespread throughout the dry season, which roughly spans the northern hemisphere winter months. People set fires to clear crop stubble and brush and to prepare grazing land for a new flush of growth when the rainy season arrives. These intentional fires are too frequently accompanied by accidental fires that invade nearby forests and woodlands. The combination of fires produces a thick haze that alternately lingers and disperses, depending on the weather.

This image from the Moderate Resolution Imaging Spectroradiometer (MODIS) on NASA’s Aqua satellite shows fire activity on March 19, 2007, across eastern India, Myanmar, Thailand, Laos, and China. Places where MODIS detected actively burning fires are marked in red on the image. The darker green areas are generally more wooded areas or forests, while the paler green and tan areas are agricultural land. Smoke pools over low-lying areas of the hilly terrain in gray pockets. The green tops of rolling hills in Thailand emerge from a cloud of low-lying smoke.

According to news reports from Thailand, the smoke blanket created air quality conditions that were considered unhealthy for all groups, and it prompted the Thai Air Force to undertake cloud-seeding attempts in an effort to cleanse the skies with rain. Commercial air traffic was halted due to poor visibility.

Hundreds of fires were burning in Myanmar and surrounding countries in March and April 2007.

From eastern India to Vietnam, scores of fires were burning across the landscape on March 13, 2007, when the Moderate Resolution Imaging Spectroradiometer (MODIS) on NASA’s Aqua satellite passed overhead.