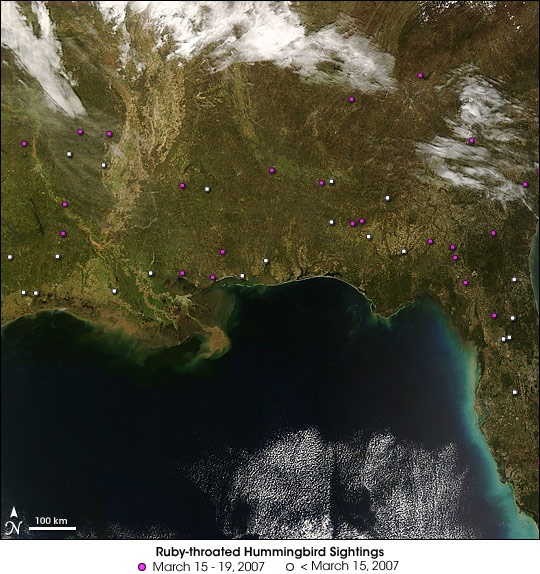 The sunlight dawdles a little longer at the end of each day, tiny bright green buds appear on trees and plants, and temperatures mellow: springtime is returning to the Northern Hemisphere. March 21, 2007, marks the first full day of spring, and the signs of its coming are evident everywhere, even from space. The green of new vegetation gradually creeps north, overtaking the winter brown that has covered the landscape for months. This photo-like image, captured by the Moderate Resolution Imaging Spectroradiometer (MODIS) on NASA’s Terra satellite on March 17, 2007, shows the northward progress of spring’s new vegetation along the Gulf Coast of the United States, the fresh green mingling with brown at higher latitudes and elevations.

On the ground, the infusion of new life extends to the animal kingdom. Every year in March, the first ruby-throated hummingbirds arrive in Gulf Coast states from their wintering grounds in Central America. Fattened on insects, the tiny birds fly 500 miles across the Gulf of Mexico and arrive in the United States hungry for nectar from early spring flowers. As spring progresses into summer, the birds follow maturing vegetation northward into the eastern United States and Canada. During this journey north, students across the country track the birds’ progress. When a student sees a bird, he or she records the sighting. Teachers report their students’ sightings to the Journey North web page, where it is logged on a map. At the end of the week, Journey North staff members review the sightings and publish a weekly summary.

The dots on this image mark student sightings of the first adult ruby-throated hummingbirds of the spring 2007 migration. White dots indicate confirmed sightings prior to March 15, while the purple dots show sightings reported (but not yet confirmed) between March 15 and March 19. The earlier sightings are along the southern coast, where the birds first come ashore after crossing the Gulf. The northernmost sightings are the most recent records. The birds are clearly concentrated in the areas that have started to green up, where nectar-laden flowers would be available. New vegetation is only beginning to reach the northern section of the image, and as a consequence, the birds have yet to migrate to those areas.