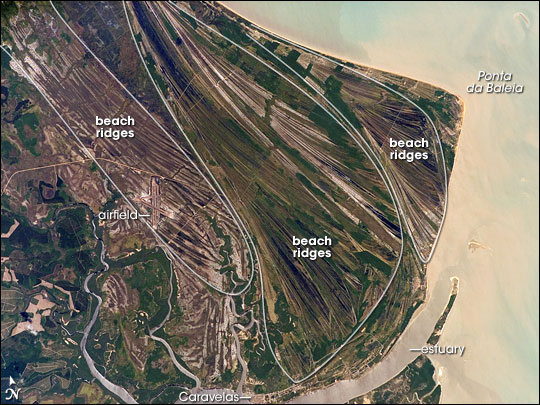 This astronaut photograph highlights an ancient shoreline, or strandplain, on the coast of Brazil. The image is dominated by numerous fine, parallel lines (trending diagonally from upper left to lower right), each of which is an ancient shoreline made up of sand transported from rivers to the north. The strandplain grew as the narrow shorelines accumulated line by line, in their dozens or even hundreds, over thousands of years. The shorelines group into “packets” with different orientations (outlined in white) that indicate their relative ages. Younger packets cut into or overlie older packets. Based on those relationships, the packet nearest the coast (farthest right) is the youngest, while the packet north of the city of Caravelas is the oldest (image bottom).

The Caravelas River flows into the Atlantic Ocean at the bottom of the view. Sediment from this river and the current shoreline produces the light browns and dun colors visible offshore. On the day the astronaut took this image, the river water was relatively clear; clear water (gray) flows out of the main river mouth and also off to one side to the south, over a levee. The Caravelas airport appears near the middle of the view, and is built on one of the ancient shoreline packets. Caravelas itself, a fishing town of about 20,000 residents, lies on an estuary and was once a flourishing whaling center—the prominent cape at image top right is known as Ponta da Baleia (Whale Point).

The featured astronaut photograph, ISS014-E-10499, was acquired December 23, 2006, with a Kodak 760C digital camera using a 400 mm lens, and is provided by the ISS Crew Earth Observations experiment and the Image Science & Analysis Laboratory, Johnson Space Center. The image in this article has been cropped and enhanced to improve contrast. The International Space Station Programsupports the laboratory to help astronauts take pictures of Earth that will be of the greatest value to scientists and the public, and to make those images freely available on the Internet. Additional images taken by astronauts and cosmonauts can be viewed at the NASA/JSC Gateway to Astronaut Photography of Earth.

This astronaut photograph highlights an ancient shoreline, or strandplain, on the coast of Brazil. The image is dominated by numerous fine, parallel lines (trending diagonally from upper left to lower right), each of which is an ancient shoreline made up of sand transported from rivers to the north.