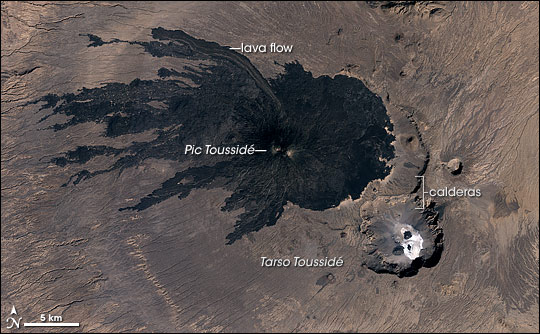 The Tibesti Mountain Range in northern Chad is one of the world’s least-studied volcanic regions. A look at the area from space, however, must intrigue vulcanologists. One of the Tibesti Mountain’s features is Tarso Toussidé. This image is a composite of images acquired by the Enhanced Thematic Mapper Plus sensor on NASA’s Landsat satellite on January 22, 2001, and February 1, 2000.

Looking like the result of a giant inkwell tipped on its side, Tarso Toussidé underwent a violent eruption in the recent geologic past, and the remains of that eruption have stained the ground black. The volcano ejected tephra, fragments of rock and volcanic glass, lava, and ash. Tephra does not last on the landscape as long as consolidated volcanic rocks such as tuff or lava, so the presence of tephra suggests fairly recent activity. In the middle of the field of dark tephra is Pic Toussidé, a lava dome poking out of the current caldera.

Volcanoes often sport multiple calderas, particularly as the primary site for eruptive activity shifts over time. East of Pic Topussidé are two calderas, the southern one bearing a white splotch roughly 2 kilometers long. This white color could result from salt. Water pooling in the caldera would not have an outlet, and as the water evaporated, minerals such as salt would be left behind.

For more on Tibesti volcanoes, see a topographic image of Tarso Toussidé and the neighboring volcano Tarso Abeki.

The eruption of Klyuchevskaya Volcano is ongoing, with gas and steam plumes, strombolian activity, and a lava flow.