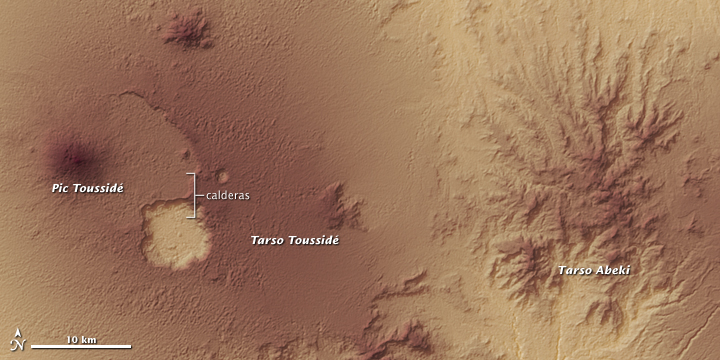 Two nearby volcanoes in the Tibesti Range Mountains in northern Chad exhibit dramatically different surface characteristics in a topographic image. The difference in their appearance is due to their relative ages and eruptive history. The map was created using stereo pairs of images (images of the same area taken from different angles) captured by NASA’s Advanced Spaceborne Thermal Emission and Reflection Radiometer (ASTER) aboard the Terra satellite on January 17, 2005, and January 20, 2006. Elevation ranges from 500 to 3,300 meters in shades of tan to dark brown.

The large volcano on the left, Tarso Toussidé, erupted violently during the Quaternary Period, the geologic age spanning the most recent 1.8 million years of Earth’s history. The eruption blanketed the surrounding area with volcanic tephra, which is unconsolidated (loosely packed) pulverized rock, volcanic glass fragments, and ash. Typically, tephra erodes more quickly than consolidated volcanic rocks such as tuff or hardened lava; therefore, the smooth appearance of the area suggests relatively recent activity. During the eruptions, the high walls of the volcano collapsed to form two overlapping calderas. Even younger than these features is Pic Toussidé, a steep lava dome that erupted on the western side of the larger caldera.

In contrast to the smoothly blanketed landscape of Tarso Toussidé, the rugged landscape of Tarso Abeki, to the east, indicates that this volcano was inactive during the Quaternary. Here, erosion has been at work for millions of years. Water-carved canyons radiating away from Abeki’s summit have degraded the volcano’s slopes. These rugged slopes may also suggest a wetter past for northern Chad.

The Tibesti Mountains are one of the most significant and perhaps least-studied intra-continental volcanic regions of the world. Political instability and the harsh Saharan climate have limited field access to the area since the 1970s. Satellite remote sensing is an increasingly practical way to study these types of remote places.