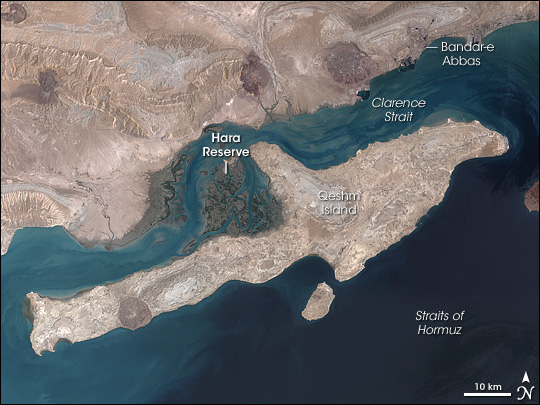 Between the Persian Gulf and the Indian Ocean lies the Strait of Hormuz, a narrow oceanic passageway through which much of the Persian Gulf’s oil production passes. On the north side of the strait are mainland Iran and Qeshm Island. Roughly 100 kilometers long, this arrow-shaped island is the Persian Gulf’s largest.

This image is a combination of two images acquired by the Enhanced Thematic Mapper on NASA’s Landsat 7 satellite, acquired on August 23, 2000, and June 23, 2001. This image shows largely arid land surfaces, both in mainland Iran and Qeshm Island. The land surface colors vary from beige to light red-brown. Clarence Strait separates the island from the rest of Iran and, like the land surfaces, the ocean waters in this region offer a varied palette. While the water south of the island appears uniformly dark, curving bands of lighter colors run through Clarence Strait, likely due to shallower water and suspended sediments.

Betweeen Qeshm Island and the mainland lies Hara Biosphere Reserve, the largest stretch of mangrove forest along the Persian Gulf shoreline. Amid an otherwise arid landscape, the forest is a hub of biodiversity in Iran, drawing migrating birds and sea turtles. The forest appears as a network of meandering land surfaces intermingled with shallow water. Compared to other land surfaces, this marine forest appears much darker.

You can download a KMZ file of Qeshm Island for use with Google Earth.

Kharg Island is Iran’s primary oil export terminal in the Persian Gulf. This rocky limestone island is unique because it is one of the few islands in the Persian Gulf with freshwater which has collected within the porous limestone. In addition to its commercial and strategic importance, the freshwater has biological importance, supporting populations of gazelles. This high-resolution photograph taken by astronauts on board the International Space Station shows detail of the tanker dock facilities, tanks and other infrastructure. Sunglint on the surface of the water highlights small amounts of oil on the sea surface and reveals the direction of the local currents.