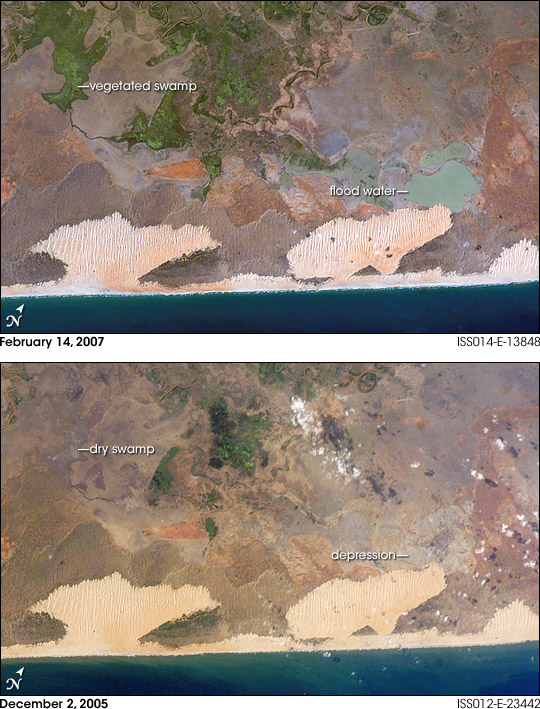 A weak El Niño weather pattern in the tropical Pacific Ocean created ripples in the world’s weather patterns in late 2006. El Niño is an episodic fluctuation in the tropical Pacific climate system that, among other consequences, causes equatorial regions around the globe to experience drought or abnormally wet conditions. The Horn of Africa frequently sees heavy precipitation during El Niño periods. Following this pattern, heavy rainfall and flooding has occurred over the region since October 2006. By late November 2006, southern Somalia and eastern Ethiopia were experiencing severe flooding that displaced hundreds of thousands of people.

These two images show the same coastal region in Somalia, south of the capital of Mogadishu (not shown), providing a visual contrast between wet and normal conditions. The images were taken on February 14, 2007, during the wetter El Niño period (top), and December 2, 2005, during more normal conditions (bottom). The February 2007 image also shows the blooming of vegetation within swamps inland of coastal dune fields. Flooding of a coastal depression by overflowing rivers and swamps is also apparent. In early March 2007, the region was experiencing outbreaks of cholera and Rift Valley Fever associated with the flooding.

The featured astronaut photograph, ISS014-E-13848, was acquired February 14, 2007, with a Kodak 760C digital camera using an 180 mm lens. The comparative photograph, ISS012-E-23442, was acquired December 2, 2005, also with a Kodak 760C digital camera using an 180 mm lens. Both images are provided by the ISS Crew Earth Observations experiment and the Image Science & Analysis Laboratory, Johnson Space Center. The images in this article have been cropped and enhanced to improve contrast. The International Space Station Program supports the laboratory to help astronauts take pictures of Earth that will be of the greatest value to scientists and the public, and to make those images freely available on the Internet. Additional images taken by astronauts and cosmonauts can be viewed at the NASA/JSC Gateway to Astronaut Photography of Earth. 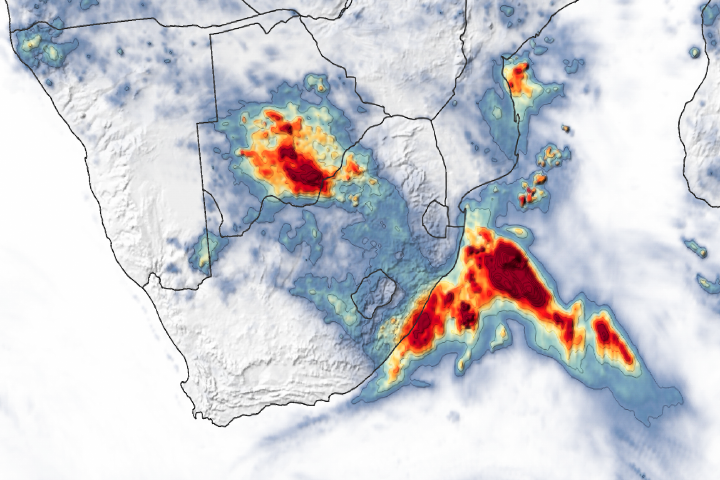