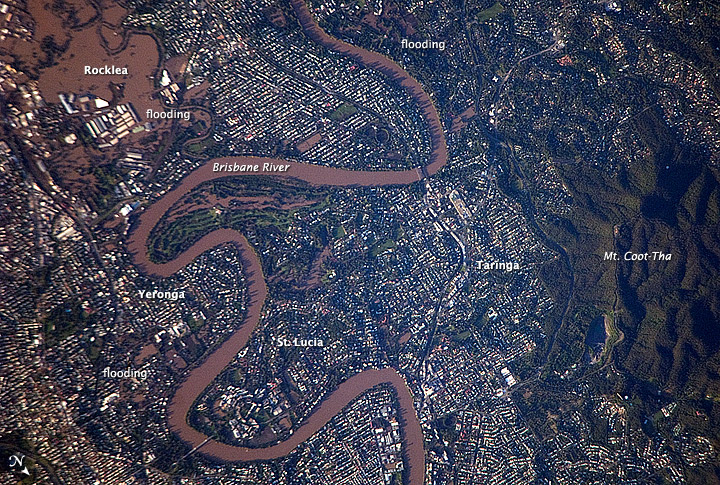 This astronaut photograph illustrates flooding in the suburbs of Brisbane, Australia, which experienced catastrophic flooding following unusually heavy rain on January 10, 2011. With soils already saturated from previous rainfall, eastward-draining surface flow caused the Brisbane River to flood—inundating an estimated 20,000 homes in suburbs of the capital city of Queensland. Other cities have also experienced damaging floods during heavy rainfall events this year.

The image, taken by astronauts on the International Space Station, highlights several suburbs along the Brisbane River in the southern part of the metropolitan area. The light-colored rooftops of residences and other structures contrast sharply with green vegetation and brown, sediment-laden floodwaters. Most visible low-lying areas are inundated, perhaps the most striking being Rocklea at image upper left. The suburb of Yeronga (lower left) also has regions of flooding, as does a park and golf course located along a bend in the Brisbane River to the south of St. Lucia (image center). Flooding becomes less apparent near the higher elevations of Mt. Coot-Tha (image right).

Astronaut photograph ISS026-E-17421 was acquired on January 13, 2011 with a Nikon D2Xs digital camera using an 800 mm lens, and is provided by the ISS Crew Earth Observations experiment and Image Science & Analysis Laboratory, Johnson Space Center. The image was taken by the Expedition 26 crew. The image in this article has been cropped and enhanced to improve contrast. Lens artifacts have been removed. The International Space Station Program supports the laboratory as part of the ISS National Lab to help astronauts take pictures of Earth that will be of the greatest value to scientists and the public, and to make those images freely available on the Internet. Additional images taken by astronauts and cosmonauts can be viewed at the NASA/JSC Gateway to Astronaut Photography of Earth. Caption by William L. Stefanov, NASA-JSC. 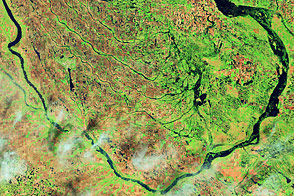