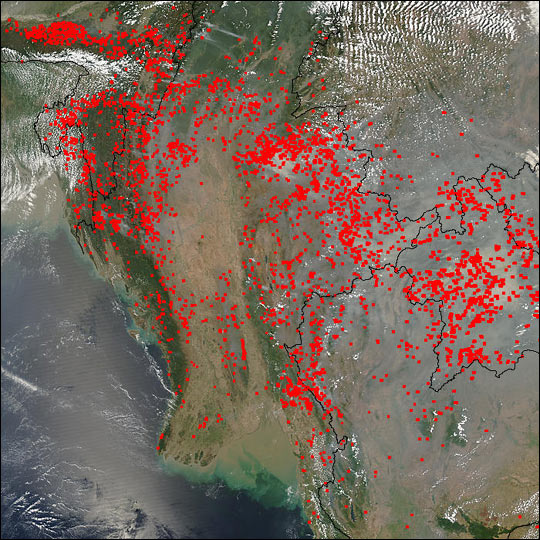 A blanket of smoke from scores of fires burning in Southeast Asia hangs in the skies in this Moderate Resolution Imaging Spectroradiometer (MODIS) image from the Aqua satellite captured on March 25, 2004. Fires, marked in red, are burning in (clockwise from top left) India, Myanmar, China, Vietnam, Laos, and Thailand. The annual agricultural fire season has been ongoing since early February, and has seemed especially intense—more fires and thicker smoke—in MODIS images from mid-March on.

The widespread nature of the fires and their location (generally located away from remaining natural vegetation, which appears deeper green) suggests that these fires are being set intentionally for agricultural purposes. Though not necessarily immediately hazardous, such large-scale burning can have a strong impact on weather, climate, human health, and natural resources.

Agricultural fires continue to spread a shroud of smoke across Southeast Asia on March 27, 2004.