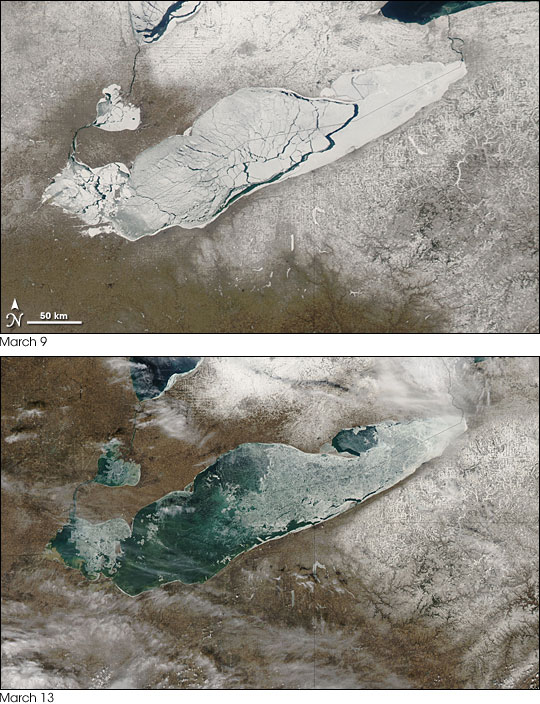 In early March 2007, ice advanced and retreated over the surface of Lake Erie, along the United States-Canada border. The Moderate Resolution Imaging Spectroradiometer (MODIS) on NASA’s Aqua satellite captured cloud-free images of the changing lake on March 9 (top) and March 13 (bottom). In the image taken on March 9, ice almost completely covers the lake, but water peeks through large cracks stretching across the water body. In the image taken on March 13, only thin, translucent layers of ice remain—in the eastern half and near the western tip. Less dramatic but still noticeable is the lighter snow cover around the lake in the later image. In the March 13 image, roadways near the lake, especially to the north and east, can be seen more easily.

According to the Great Lakes Information Network, Lake Erie is the shallowest of all the Great Lakes. Its average depth is 19 meters (62 feet), and its maximum depth is 64 meters (210 feet). In contrast, Lake Superior has an average depth of 147 meters (483 feet), and a maximum depth of 406 meters (1,332 feet). Erie’s shallowness not only makes it more prone to fluctuating water levels, but also enables this lake to freeze and thaw more readily than its neighbors. On March 5, just four days before icing over, Lake Erie had been about as ice-free as it would again appear on March 13. (For images of the lake on March 5, see the MODIS Rapid Response images of the western half and eastern half.)

People who live to the south and east of the Great Lakes can spend much of the winter digging out their driveways, thanks to a phenomenon called lake effect snow. When cold air, such as an air mass from the Arctic, passes over the open water of the lakes, it picks up moisture and heat. On the downwind side of the lakes, the moisture in the air condenses into snow. As long as the lakes are ice-free, they can fuel lake-effect snow storms from fall until spring.