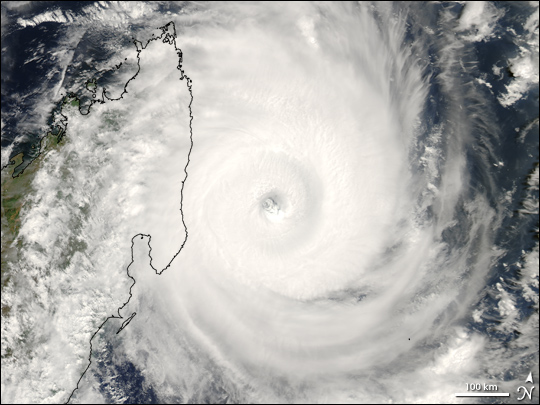 On March 14, 2007, storm-weary Madagascar braced for its fourth land-falling tropical cyclone in as many months. Cyclone Indlala was hovering off the island’s northeast coast when the Moderate Resolution Imaging Spectroradiometer (MODIS) on NASA’s Aqua satellite captured this photo-like image at 1:40 p.m. local time (10:40 UTC). Just over a hundred kilometers offshore, the partially cloudy eye at the heart of the storm seems like a vast drain sucking in a disk of swirling clouds.

According to reports from the Joint Typhoon Warning Center issued less than three hours after MODIS captured this image, Indlala had winds of 115 knots (132 miles per hour), with gusts up to 140 knots (161 mph). Wave heights were estimated to be 36 feet. At the time of the report, the storm was predicted to intensify through the subsequent 12-hour period, to turn slightly southwest, and to strike eastern Madagascar as a Category 4 storm with sustained winds up to 125 knots (144 mph), and gusts up to 150 knots (173 mph).

According to Reuters AlertNet news service, Madagascar’s emergency response resources were taxed to their limit in early March 2007 as a result of extensive flooding in the North, drought and food shortages in the South, and three previous hits from cyclones in the preceding few months: Bondo in December 2006, Clovis in January 2007, and Gamede in February.

You can download a 250-meter-resolution Cyclone Indlala KMZ file for use with Google Earth.

n March 14, 2007, storm-weary Madagascar braced for its fourth land-falling tropical cyclone in as many months. Cyclone Indlala was hovering off the island’s northeast coast.

On March 14, 2007, storm-weary Madagascar braced for its fourth land-falling tropical cyclone in as many months.

Acquired March 10, 2010, this true-color image shows Tropical Cyclone Hubert between Madagascar and Réunion. Although the storm lacks a discernible eye, it spans hundreds of kilometers. 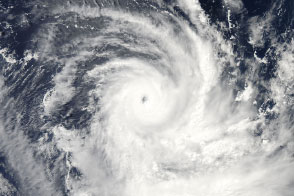