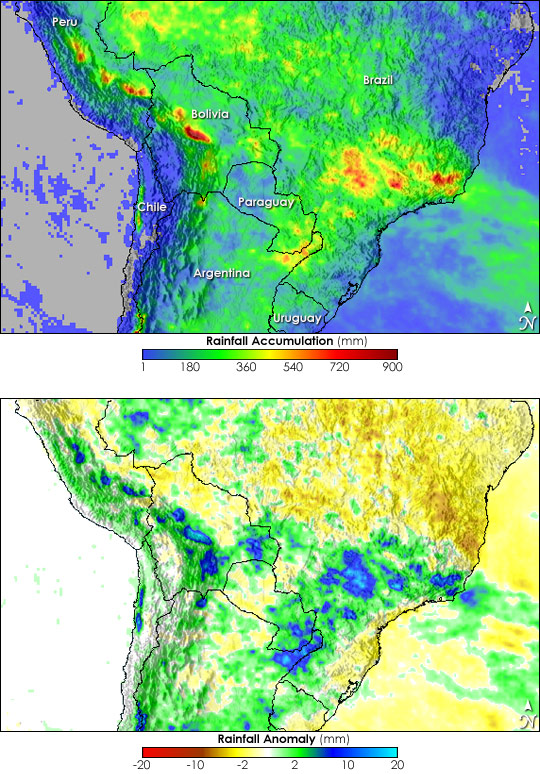 Persistent heavy rains in January 2007 triggered flooding across parts of central South America. The rains may be related to El Niño conditions in the central and eastern Pacific Ocean. El Niño, a warming of the eastern Pacific Ocean around the equator, tends to bring higher-than-average rainfall to parts of South America. In 2007, the unusually heavy rains caused floods and mudslides that killed more than 50 people in southeastern Brazil at the beginning of the year. The rains and floods expanded west into Bolivia and Peru during January. Approximately 40,000 people had been affected by flooding in Bolivia, reported the United Nations News Service, and floods and mudslides had killed at least 16 in central Peru, said BBC News.

These images show rainfall over South America between December 22, 2006, and January 22, 2007. The images were made from the near-real-time Multi-satellite Precipitation Analysis (MPA), which is based in part on data collected by the Tropical Rainfall Measuring Mission (TRMM) satellite. Total accumulated rainfall is shown in the top image. Splotches of dark red indicate where the heaviest rain, around 700 to 900 millimeters (about 28-36 inches) fell over Brazil, Bolivia, and Peru along the Andes Mountains. The lower image shows the rainfall anomalies (deviations from the average rainfall) recorded over South America during the same period since TRMM’s launch in 1997. The anomaly pattern shows above-average rainfall (green and blue areas) stretching from southeast Brazil across central South America and into Peru, with below-average (dark yellow area) rainfall over central and eastern Brazil. This pattern is generally consistent with patterns seen during El Niño events.