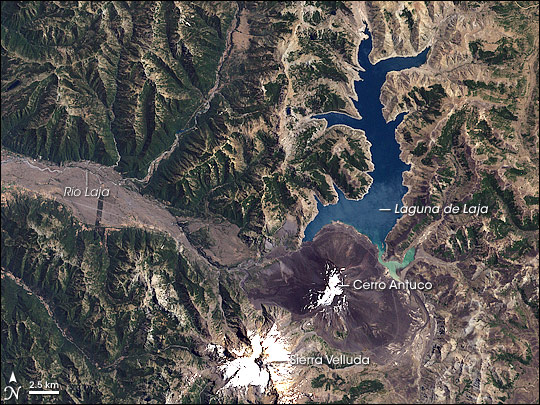 Parque Nacional Laguna de Laja is part of Chile’s “Lake District”—a popular tourist destination. A hydroelectric dam at the southwest end holds the lake in place, allowing water to escape via the fast-flowing Rio Laja. The terrain surrounding both the lake and the river sport impressive waterfalls. To the south, the Cerro Antuco and Sierra Velluda Volcanoes tower over the water bodies.

On January 27, 2000, the Landsat 7 satellite took this picture of Chile’s Lake District. Immediately south of Laguna de Laja is Cerro Antuco, a stratovolcano composed of alternating layers of hardened lava, ash, and volcanic rock. Farther south is Sierra Velluda, another stratovolcano active during the Pleistocene (the most recent ice age). Although a little snow caps Cerro Antuco, much more snow adorns the summit of its southern neighbor, even during Chile’s summer. Sharp ridges and deep valleys carve this rugged region, which alternates between bare rock and lush vegetation. The pale outline of Laguna de Laja suggests that its water level is not at its highest.

Cerro Antuco bears some responsibility for the brown swath sweeping toward the west along the river. In the early Holocene (the name geologists have given to the most recent 10,000 years of Earth’s history), an edifice collapse—in which part of the rim of the caldera or the side of the volcano rapidly collapses during an eruption—of this volcano produced an avalanche of debris that spread west. In historical times, lava has also flowed along the same path as Rio Laja. Dark, rectangular patches inside this swath of seemingly barren land are likely cultivated fields.

The high peaks of the Andes form the backbone of South America and the political border between Chile and Argentina. Formed from the subduction of the Nazca Plate under the South American Plate, the south-central Andes also includes several major volcanoes. One of the most active border volcanoes is Volcan Maipo, located just southeast of Santiago, Chile. This image from the International Space Station shows the volcano near the southern hemisphere spring equinox. The lake, just east of Maipo’s peak, is still ice-covered. However, the increasing temperatures of spring are suggested by a muddy-looking streak near the lower left corner. The streak appears to be a landslide or avalanche that flowed westward down a rugged slope, possibly triggered by instability in the snowpack due to snow melt.