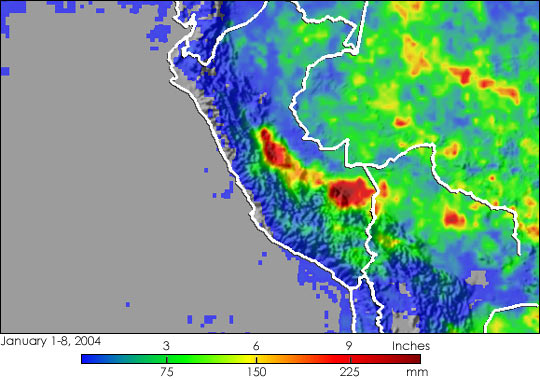 Heavy rains along the eastern side of the Andes mountain range in eastern Peru marked the start of the summer rainy season. At least six people were reported lost due to mudslides and flooding brought on by the heavy rains. In summertime, when warm, humid, tropical air flows in from the Amazon Basin and pushes up against the mountains, the moisture is squeezed out, which can produce abundant rainfall. The heaviest rains fell over the jungle and mountainous regions in the central provinces of San Martin and Huanuco and in the southern province of Puno.

The TRMM-based, near-real time Multi-satellite Precipitation Analysis (MPA) at the NASA Goddard Space Flight Center monitors rainfall over the global tropics. MPA rainfall totals are shown for northwestern South America for the period 1-8 January, 2004. It shows rainfall totals in excess of 10 inches (darker read areas) along the eastern side of the central and northern Andes in Peru. Widespread rain on the order of 3 to 6 inches (green and yellow areas) extends over the vast Amazon River Basin in Brazil towards the east.