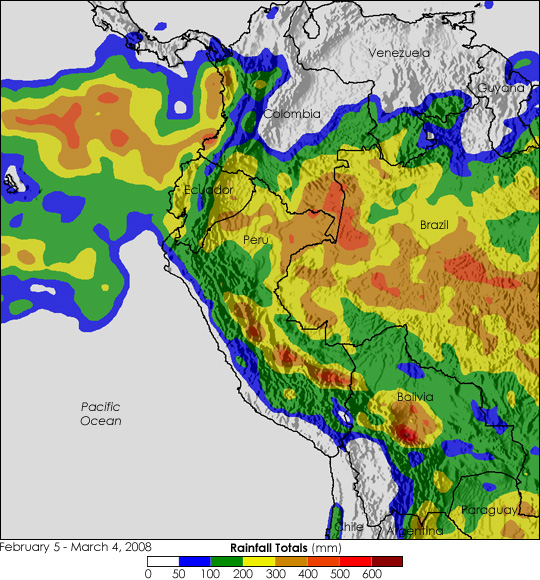 Persistent, heavier-than-normal rains throughout February and March 2008 triggered flooding across parts of northern and central South America. La Niña conditions in the Pacific may have caused the unusual rainfall. February falls in the middle of the rainy season, and flooding is not unusual, but the effects were enhanced by the cooler-than-normal ocean surface temperatures in the central and eastern Pacific that are associated with La Niña. As of March 7, the flooding had been blamed for at least 52 fatalities in Bolivia, 19 in Peru, and 16 in Ecuador, said news reports.

This image shows the flood-inducing rainfall totals recorded between February 5 and March 4, 2008. The image was made from data from the near-real-time Multi-satellite Precipitation Analysis at NASA Goddard Space Flight Center, which is used to monitor rainfall over the global tropics. The highest rainfall totals for the period (shown in red) are on the order of 600 millimeters (about 24 inches) and occur over central Bolivia along the eastern slopes of the Andes. Areas of rainfall in excess of 300 mm (~12 inches, shown in yellow) extend farther northward along the mountains into Peru and over the Amazon Basin. La Niña conditions were expected to persist at least through Northern Hemisphere spring.

The Multi-satellite Precipitation Analysis is based on data collected by the Tropical Rainfall Measuring Mission (TRMM) satellite. TRMM is a joint mission between NASA and the Japanese space agency, JAXA.