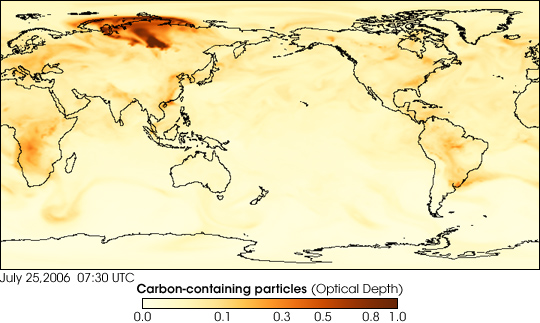 Carbon dioxide isn’t the only carbon-containing chemical that interests atmospheric and climate scientists. Every day, factories, vehicles, coal-burning power plants, and natural and agricultural fires churn out a steady stream of tiny, carbon-containing particles that also play a role in air quality and climate. Soot (black carbon) absorbs incoming sunlight, and can warm the climate, while other organic carbon particles can reflect incoming light. This particulate carbon, as scientists call it, is also a type of air pollution.

Scientists at NASA’s Global Modeling and Assimilation Office have developed sophisticated computer models to forecast how atmospheric circulation carries carbon-containing particles from one part of the world to another. Scientists feed data on particulate carbon emissions from worldwide sources into the model, and then the model forecasts when and where it will spread. The image above shows a single frame “frozen” from an animation that illustrates a NASA model’s forecast of the spread of carbon-containing particles from large fires burning in Siberia in July 2006. Places where the particles were thick in the air are brownish-red. These areas of high optical depth are places where a significant part (up to two-thirds) of the incoming sunlight is unable to penetrate the haze and reach the Earth’s surface.

The Siberian fires billowed out a thick cloud of particulate carbon, which spread north and east. Other, lower-intensity sources of carbon include grassland fires in southern Africa, fires in South America, and urban or industrial pollution from China and the eastern United States. Swirls over oceans show how carbon generated elsewhere travels great distances.

Atmospheric scientist Peter Colarco of NASA’s Goddard Space Flight Center is one of the scientists testing and refining the model that made this “chemical weather forecast.” Among his goals is figuring out how to use NASA’s ability to observe airborne particles (aerosols) from space to improve these chemical forecast models. Beginning in 2006, Colarco and his colleagues began including fire-detection data collected by the Moderate Resolution Imaging Spectroradiometer (MODIS) on NASA’s Terra and Aqua satellites as input to the model. Large-scale forest fires, such as those in Siberia in 2006, can generate massive amounts of carbon-containing particles. These large fire events give scientists an opportunity to check their model’s predictions against a specific, real-world event.

Aerosols and Carbon Monoxide over Africa and Asia