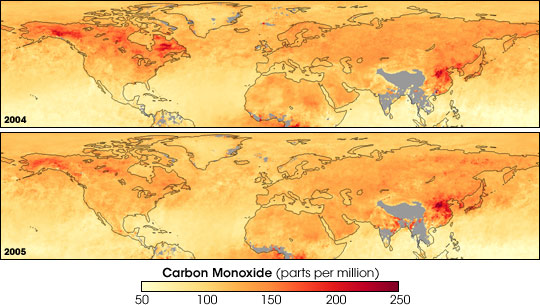 Like the burning of gasoline in your car, fires release carbon monoxide, hydrocarbons (molecules made of carbon and hydrogen atoms), and nitrogen oxides—all of which, when exposed to sunlight, take part in the chemical reactions that create ground-level ozone. Unlike the ozone in the stratosphere, which absorbs dangerous ultraviolet light, ozone near the Earth’s surface is a harmful air pollutant. While urban and industrial contributions to pollution go on year round, wildfires can add to global pollution levels in seasonal, intense bursts.

Carbon monoxide observations collected from satellites are a good way to track the spread of emissions from fires. This pair of images shows global carbon monoxide concentrations in the summers of 2004 (top) and 2005 (bottom) collected by the MOPITT (short for “Measurements of Pollution in the Troposphere”) sensor on NASA’s Terra satellite. A record fire season in Alaska in 2004 spread smoke across the Northern Hemisphere and elevated carbon monoxide levels across North America and Europe. Red indicates high concentrations, while yellow indicates low concentrations. The high levels over China (far right) are caused by industrial and urban pollution.

The record-breaking 2004 fire season coincided with an international research campaign that used a combination of ground-, aircraft-, and satellite-based sensors to study global pollution drift. As part of the research project, scientists used fire detection information from NASA satellites to estimate how much pollution the Alaskan fires released, and then used atmospheric chemistry and weather models to predict where the pollution would spread. The research revealed that the fires produced approximately 30 teragrams of carbon monoxide (1 teragram is about 2.2 billion pounds), roughly equal to all the human-generated carbon monoxide for the entire continental United States during the same period. The scientists estimated that the boost in carbon monoxide and other fire-emitted pollutants increased ground-level ozone up to twenty-five percent in the northern continental United States, and by up to ten percent in Europe.

NASA images by Robert Simmon and Jesse Allen, based on data provided by the NCAR MOPITT Team.