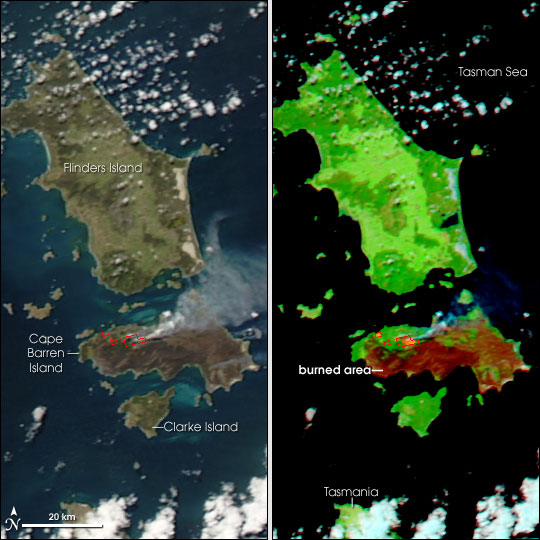 A trail of small islands connects the southeastern tip of Australia to Tasmania, to the south. A cluster of three large (in comparison to others in the chain) islands known as the Furneaux Group sits just north of Tasmania. In mid-October 2006, the central island in this group—Cape Barren Island—was ablaze.

This pair of images is based on data from the Moderate Resolution Imaging Spectroradiometer (MODIS) on NASA’s Aqua satellite on October 15. The left-hand image is a photo-like view of the area, showing the active fire locations that MODIS detected outlined in red. A plume of gray smoke spreads northeast. The right-hand scene uses both visible and infrared light that MODIS observed to highlight the burned area. The extent of the burn is dramatic: all the red areas show burned vegetation. Vegetation appears green, water appears dark blue (nearly black), while clouds appear light blue or white. In the infrared-enhanced image, the smoke becomes a transparent blue. A bright pink glow in this type of image often indicates open flame.

Fewer than 100 people live on Cape Barren Island, most of them on the northwestern corner. The island has undulating, grassy lowlands interrupted by outcrops of granite mountains. In the second week of October, two separate fires on the island burned together, creating a single large blaze that had affected about 78,000 hectares (nearly 193,000 acres) as of October 16.

These images are provided at MODIS’ maximum spatial resolution (level of detail) of 250 meters per pixel. The large images show a wider area. The MODIS Rapid Response Team provides both the photo-like and infrared-enhanced versions of the images at additional resolutions.

In mid-October 2006, fires had scorched thousands of acres across Cape Barren Island, south of Australia.