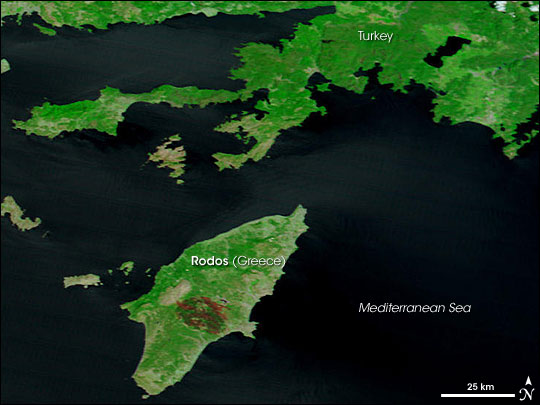 Over the last weekend of July, a large forest fire on the Greek island Rodos (Rhodes) forced hundreds of tourists to evacuate. This image of the island was captured on July 29, 2008, by the Moderate Resolution Imaging Spectroradiometer (MODIS) on NASA’s Terra satellite. It uses a combination of visible and infrared light to highlight the burned area, which stands out as a brick red patch across the central part of the island. Unburned vegetation is bright green. The fire burned out of control for several days in the fourth week of July, but as of the time of this image, MODIS did not detect any remaining hot spots.

The high-resolution image provided above is at MODIS’ maximum spatial resolution (level of detail) of 250 meters per pixel. The MODIS Rapid Response Team provides daily images of the region in additional resolutions and formats, including photo-like natural color.