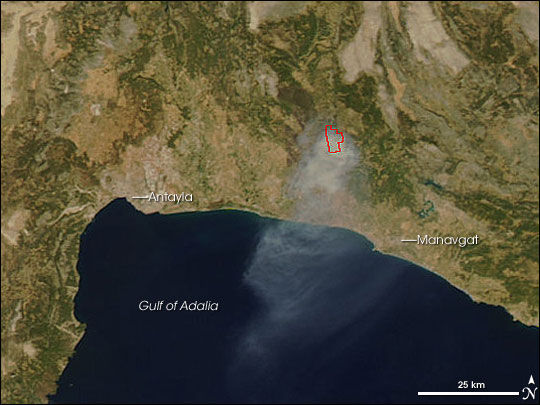 A large forest fire in Turkey’s top tourist region produced devastating damage in early August 2008. According to news reports, the blaze burned at least 60 homes, a school, and a mosque, and was occupying at least 2,000 firefighting personnel. This image of the fire was captured by the Moderate Resolution Imaging Spectroradiometer (MODIS) on NASA’s Aqua satellite on August 3, 2008. The place where MODIS detected active fire is outlined in red. The high-resolution image provided above is at MODIS’ maximum spatial resolution (level of detail) of 250 meters per pixel. The MODIS Rapid Response Team provides daily images of the region in additional resolutions.

Nearly two thousand residents of communities in the San Bernardino Mountains had to evacuate their homes over the weekend of September 15, 2007, when a fast-spreading wildfire raced through the San Bernardino National Forest. According to the USDA Forest Service’s Incident Information Website, the Butler 2 Fire was an estimated 15,433 acres and 12 percent contained on September 17.