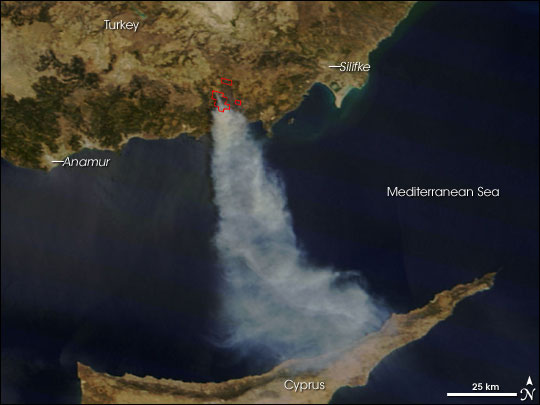 At least two people were killed and dozens more suffered from smoke inhalation during a forest fire that broke out in southern Turkey in early July 2008. This natural-color image of the blaze was captured by the Moderate Resolution Imaging Spectroradiometer (MODIS) on NASA’s Terra satellite on July 8. The area where the sensor detected actively burning fire is outlined in red. Thick smoke flowing over the Mediterranean Sea as far as Cyprus indicates the strength of the wind driving the forest fire.

The high-resolution image provided above is at MODIS’ maximum spatial resolution (level of detail) of 250 meters per pixel. The MODIS Rapid Response Team provides images of southern Turkey in additional resolutions.