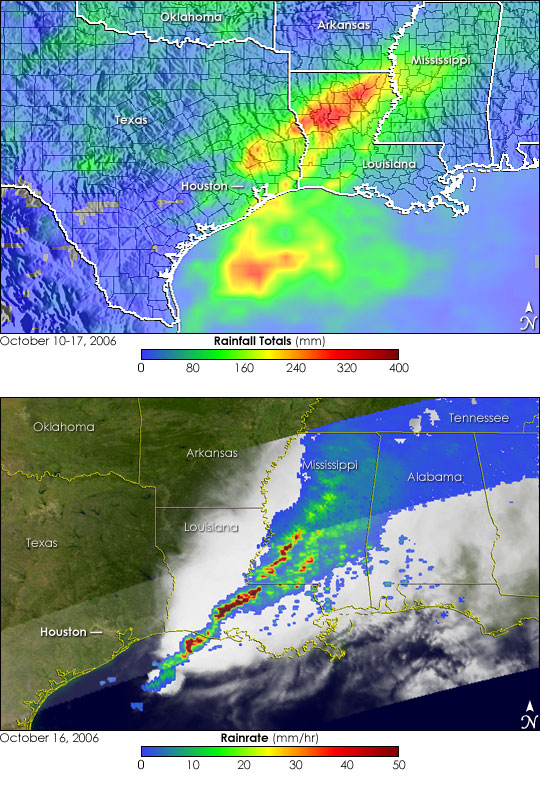 Up to ten inches of rain fell over parts of Houston, Texas, between October 10 and October 17, 2006. The rain fell as a line of strong storms, fueled by moisture being pulled up from the Gulf of Mexico, swept across the southeastern United States. Several tornados and deadly flooding were reported across the region. Four people died as a result of the flooding around Houston, said news reports.

The top image shows rainfall totals over the southeastern United States for October 10 through October 17, 2006. The rainfall totals come from the near-real-time, Multi-satellite Precipitation Analysis, which is partially based on rainfall measurements made by the Tropical Rainfall Measuring Mission satellite (TRMM). The highest totals, shown in red, are around 12 inches (300 millimeters) and occur over north-central Louisiana. Ten-inch (250-millimeter) amounts (lighter red) are visible north of Galveston Bay, and most of eastern Texas and western Louisiana received at least 5 inches (130 millimeters) of rain (green areas).

The lower image provides a snapshot of the line of storms at 11:17 p.m. Central Daylight Time on October 16 (4:17 UTC on October 17), as the storm system was passing through central Louisiana. Taken by the instruments on the TRMM satellite, the image shows rain intensity associated with the advancing line of storms. The rains are stretched out in a long, broken line of storms extending from the northwestern Gulf of Mexico through central Louisiana and into southwestern Mississippi. The line of intense rain (dark reds) is relatively thin across Louisiana. A broader area of weaker rain (wide blue and green area) extends farther north. Rain rates in the center swath are from the TRMM Precipitation Radar, a unique space-borne precipitation radar, while rain rates in the outer swath are from the TRMM Microwave Imager. The rain rates are overlaid on infrared data from the TRMM Visible Infrared Scanner.

TRMM was placed into service in November of 1997. From its low-earth orbit, TRMM has been measuring rainfall over the global tropics using a combination of passive microwave and active radar sensors. TRMM is a joint mission between NASA and the Japanese space agency, JAXA.