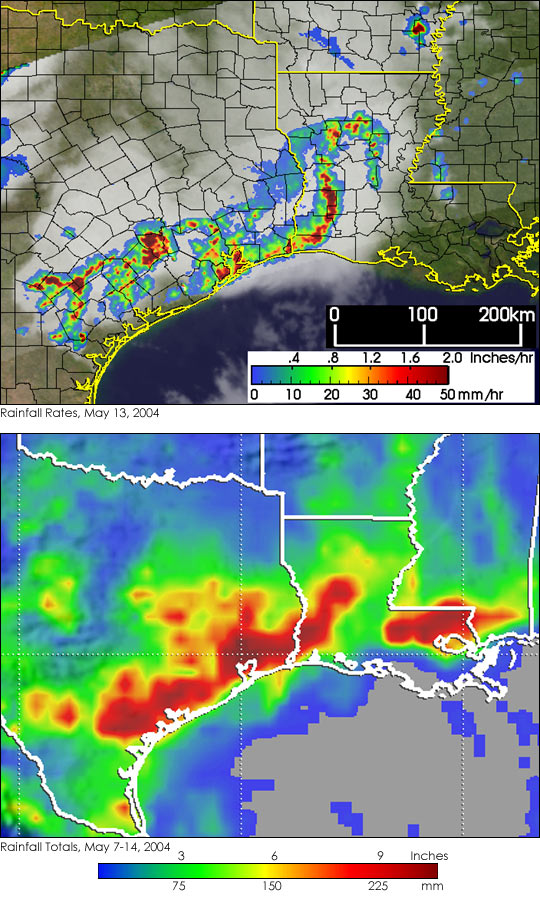 An advancing cold front supported by an upper-level trough triggered abundant showers and strong thunderstorms that brought numerous reports of hail and high winds from central Oklahoma through central Texas. The storms also dumped heavy rains over coastal portions of Texas and Louisiana, triggering localized floods, as low-level winds drew moisture up from the Gulf of Mexico.

The top image gives a broad snapshot of the storms that led to the heavy rains. The Tropical Rainfall Measuring Mission (TRMM) satellite captured this image at 21:29 UTC (4:29 pm CDT) on May 13, 2004. It shows a horizontal view of rain intensity. Rain rates in the center swath are from the TRMM Precipitation Radar (PR), the first and only precipitation radar in space, and rain rates in the outer swath are from the TRMM Microwave Imager (TMI). The rain rates are overlaid on infrared (IR) data from the TRMM Visible Infrared Scanner (VIRS). TRMM shows a long, broken line of storms beginning with a squall line over southwestern Louisiana with an intense leading edge of (dark reds). The broken line of storms extends all the way back into the southern hill country of central Texas. The large TRMM image also shows a separate area of a few intense, individual thunderstorms over north central Texas.

The TRMM satellite uses both passive and active sensors to measure rainfall from space. The TRMM-based, near-real time Multi-satellite Precipitation Analysis (MPA) at the NASA Goddard Space Flight Center monitors rainfall over the global tropics. MPA rainfall totals for May 7-14, 2004 show peak rainfall amounts of up to 10 to 12 inches (dark red areas) across much of the Texas coast and parts of Louisiana. Moderate amounts on the order of 3 to 6 inches (green areas) cover much of Louisiana and much of central and southern Texas.