"Fishapod" Fossil Found in the Arctic 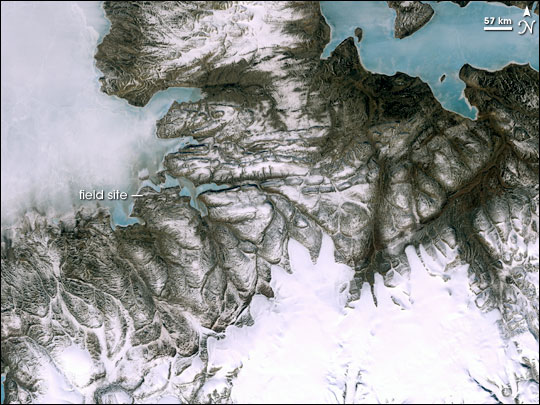 About 375 million years ago, Canada’s Ellesmere Island looked very different. It enjoyed a subtropical climate on a massive continent, with big ferns and giant horsetails. Not only did the landscape look different, so did the animals. Rummaging around in the shallow waters, occasionally poking their heads up for gulps of air, some fish sported legs. Finding evidence of these odd fish on what is now an Arctic island wasn’t easy. Frigid temperatures, punishing winds, relentless precipitation, even the occasional hungry polar bear all threatened to end a good fossil hunt in disappointment, but in 2004, a team of paleontologists persevered. Researchers from the University of Chicago, the Academy of Natural Sciences in Philadelphia, and Harvard University discovered a new fossil species: Tiktaalik roseae.

Finding a fossil means finding the rocks likely to bear it. Most fossils are found in sedimentary rocks. Over time, wind and water can erode rocks into sediment, which later hardens. When it solidifies, the sediment may contain the remains of a plant or animal. Fossils are also easier to find in places that don’t support a lot of vegetation and instead provide plenty of rocky outcrops. And finding fossils from a particular geologic time period means locating rocks of the same age. These useful characteristics came together at Ellesmere Island in Canada’s Nunavut Territory. The Enhanced Thematic Mapper Plus sensor on the Landsat 7 satellite took this picture of Ellesmere Island on June 16, 2000. The field site where paleontologists found Tiktaalik roseae is near the southern tip of the island. Glaciers and snow are white, bare or thinly vegetated ground is brown, and ice-covered water appears light blue. Even in June, ice covers much of the island’s rugged terrain, where temperatures don’t approach the balmy comfort familiar to the animals that lived there millions of years ago. In fact, when fish with legs roamed the region, the land was in a different place altogether, most likely straddling the Equator. Continental drift has brought Ellesmere Island to the far north today.

Adapting to life on land means overcoming several challenges: breathing oxygen from air rather than water, supporting one’s own weight without water’s buoyant assistance, even contending with intense ultraviolet radiation without water’s protective cover. In the 1950s, a prominent paleontologist proposed that vertebrates first moved onto land when stranded fish wriggled between ponds—that movement onto land preceded the development of legs. Discoveries of new fossils, however, have changed the science community’s interpretation of events. Many paleontologists now think that some fish developed legs while still in the water.

Nicknamed as a “fishapod,” Tiktaalik roseae helps fill in this new narrative of vertebrate history. This fossil shows an odd combination of features found in fish and tetrapods (vertebrates with four legs or appendages derived from legs). On the one hand, these fossils have fish scales and fins. On the other hand, they have tetrapod-like bones in their appendages and crocodile-like heads suited to snapping up prey. Unlike fish, these fossils have necks that would have given the animals enough mobility to move their snouts above water to breathe.

Scientists typically use Latin or Greek to formally name species. Tiktaalik’s discoverers, however, relied on native Nunavut Territory elders, who suggested the Inuktikuk word for “large freshwater fish.” Paleontologists found the first traces of this fossil in 2002 and returned two years later to look for more. On the second expedition, they saw a fossil snout sticking out of a cliff face. Hoping to find the rest of the animal behind they snout, they hit pay dirt, and also found another fossil—twice as long—nearby. The fossils’ excellent preservation allowed the discovery of features that shed new light on early tetrapod evolution.