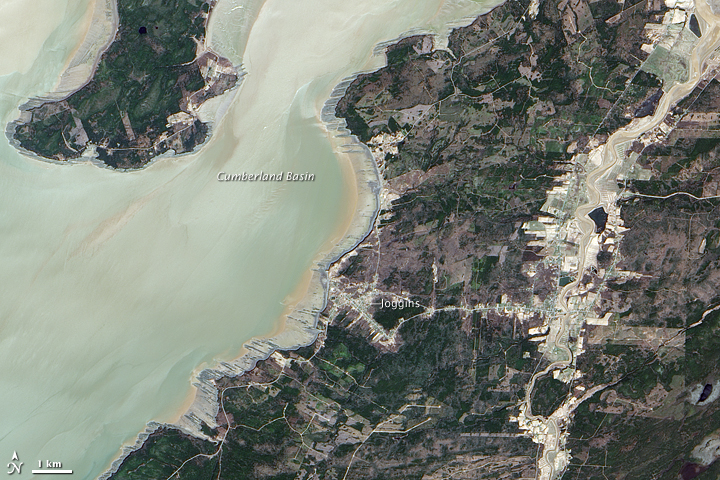 Thanks to fossils, paleontologists have glimpsed a remarkable complexity of life forms from our planet’s past, but our understanding of the past is imperfect. For an organism to fossilize, it must be buried quickly and preserved relatively intact for thousands or millions of years. Imagine a modern-day forest. If a stream runs through that forest, leaves from overhanging trees will periodically fall into the stream, where they have a good chance of being buried and fossilized. But the location of these eventual fossils will have no relation to the forest’s original arrangement. What would be ideal for a modern-day paleontologist would be an ancient forest with upright trees buried where they stood—a rare occurrence usually resulting from flash floods.

Nova Scotia’s Joggins Fossil Cliffs preserves a paleontologist’s dream: multiple layers of ancient forest with trees still in their standing positions and undisturbed animal tracks. The Advanced Land Imager (ALI) on NASA’s Earth Observing-1 satellite captured this true-color image of the Joggins Fossil Cliffs region on April 30, 2009. The fossil cliffs trace a curving line through the middle of this image, with Cumberland Basin in the west and a small village in the east. Sunlight and sediment color the water of Cumberland Basin pastel. On land, colors vary from deep green vegetation to brown bare rock to gray paved surfaces. Roads cut crooked lines through the landscape. The cliffs appear gray-beige, giving way to buff color nearest the water.

Today, boreal forest and farmland occupy the area around Joggins Cliffs, but over 300 million years ago, this area was a coastal rainforest. Floodwaters deposited massive quantities of sand and mud quickly enough to cover the region, preserving trees where they stood. The landscapes preserved in the Joggins Fossil Cliffs date back to the Carboniferous Period (also known as the Mississippian and Pennsylvanian Periods). Lasting from approximately 360 to 290 million years ago, this period was characterized by vast, damp swamps that later transformed into abundant coal deposits. The rock layers of the Joggins Fossil Cliffs preserve a 15-million-year sequence of sedimentary rocks from the late Carboniferous Period. At that time, the area was slowly sinking, accumulating sediment and preserving fossils.

In the much more recent geologic past, glaciers and tides conspired to carve today’s cliffs. During the Pleistocene Ice Age, a massive ice sheet covered much of North America, weighing heavily on the rocks underneath. After the ice melted, the Earth’s crust rose slightly, just as a balloon would rebound after a weight was removed. This upward movement elevated the ancient fossil beds. Afterwards, strong tides in the Bay of Fundy beat repeatedly on the rocks, slowly carving away at the coastline.

Powered by coal and intrigued by fossils, nineteenth-century geologists and paleontologists realized the value of the Joggins Fossil Cliffs starting in the 1840s. Among the more interesting finds at Joggins were fossil vertebrate skeletons inside fossil tree stumps—the remains of animals that may have used the hollow trunks as dens. Besides fossil trees, the cliffs preserve some of the earliest known reptile tracks, and tracks of arthropleurids—millipede-like creatures that could stretch to 2 meters (6 feet). The well-preserved nature of the fossil flora and fauna at Joggins has earned the site World Heritage status from the United Nations Education, Scientific and Cultural Organization (UNESCO).