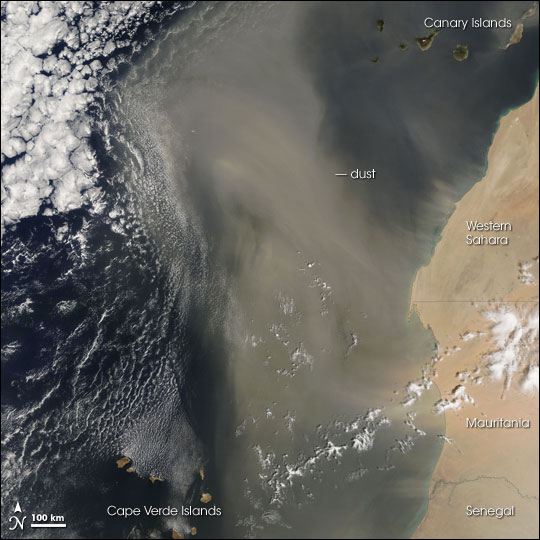 Saharan dust swept off the west coast of Africa, then turned northwards on March 8, 2006. The Moderate Resolution Imaging Spectroradiometer (MODIS) flying onboard the Terra satellite captured this image the same day. In this image, tendrils of pale beige dust swirl off the coast of Western Sahara, Mauritania, and Senegal. The biggest swath of dust appears to come off the coast of Mauritania. Once over the Atlantic, the dust heads north, and appears to be aimed at Europe rather than the Caribbean.

The biggest desert on the planet and the source of many dust storms, the Sahara covers more than a quarter of Africa. In the western part of the continent, the Sahara extends southward into Mauritania. Just south of the Sahara is the Sahel. Stretching across the continent from east to west, it is a dry zone that marks the boundary between the Sahara and more fertile regions to the south. The Sahel is particularly vulnerable to desertification—land degradation from climate change and/or human activity that transforms a region to a desert.

Dust storms swept off the west coast of Africa in March and April 2006.