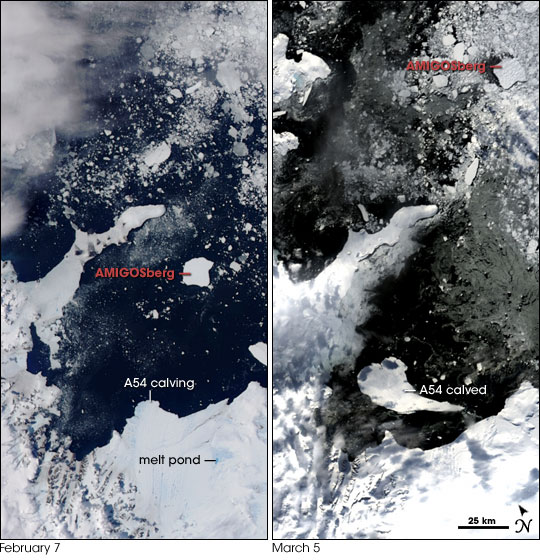 In March 2006, a team of researchers from the United States and Argentina visited an iceberg near the Antarctic Peninsula in order to gain a better understanding of how ice melts and disintegrates when it encounters warmer areas. The team boarded a helicopter, flew to the iceberg, and set up weather instruments, snow sensors, and a video camera on the iceberg’s surface. The iceberg, nicknamed AMIGOSberg, will take the equipment along on its journey northward into warmer waters, and the sensors will send the data they collect to the scientists via a satellite.

The Moderate Resolution Imaging Spectroradiometer (MODIS) flying onboard the Aqua and Terra satellites captured these images of AMIGOSberg and its surroundings in early 2006. Aqua took the picture on the left on February 7, and Terra took the image on the right on March 5. Besides capturing AMIGOSberg’s northeastward drift, the images also show the breaking off—calving—of a new iceberg, A54, near the bottom of the image.

Learning in such detail how an iceberg breaks up would be interesting on its own, but glaciologists are intrigued by the process for another reason. Disintegration of an iceberg mimics what can happen to ice shelves under certain conditions. Fed by glaciers, these thick slabs of ice fringe the coastlines of Greenland and Antarctica, anchored to land, but floating in the ocean. Periodically, ice shelves break off big pieces of themselves. The calved ice becomes an iceberg, and it can drift with ocean currents far away from its birthplace. As an iceberg from Antarctica drifts northward, it gradually enters a warmer climate. The warmer air and ocean temperatures not only melt the iceberg, they actually cause it to disintegrate, often rapidly.

Iceberg calving is a common process that glaciologists have observed as long as they have studied Antarctica. A newer phenomenon is ice shelf disintegration, in which an ice shelf fragments into small pieces in a relatively short time period. Both phenomena have appeared in Antarctica’s Larsen Ice Shelf. Scientists divided the Larsen Ice Shelf into three parts, from north to south: Larsen A, Larsen B, and Larsen C. The Larsen A began retreating in the 1980s and the remainder disintegrated 1995. In 2002, most of the Larsen B underwent a large, rapid, and dramatic disintegration. Glaciologists studying the Larsen Ice Shelf have proposed a mechanism that causes these rapid breakups: melt ponds. Forming on the surface of the shelf during warm summers, ponds of melt water can eventually carve through the ice shelf and lead to disintegration. The Larsen C is still intact, but melt ponds could be seen on the northernmost part of the Larsen C in early 2006.