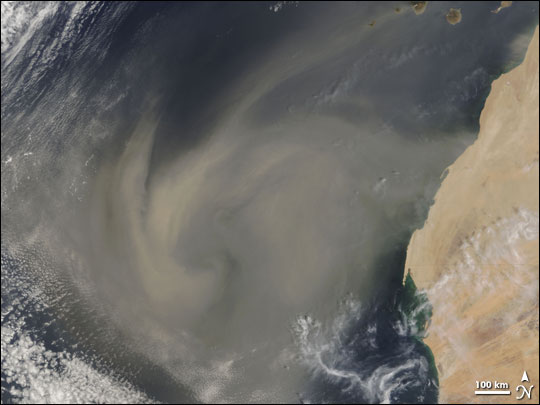 A dust storm, several hundred kilometers across, swirled off the west coast of Africa and over the Atlantic on September 4, 2005. The Moderate Resolution Imaging Spectroradiometer (MODIS) flying onboard the Terra satellite captured this image the same day. The dust storm covers almost the entire image, its color ranging from tan to pale beige. The dust appears to concentrate in the center of the storm. To the west, clouds fringe the edges of the dust storm. To the east are the coastlines of Mauritania and Western Sahara, and the Canary Islands.

Areas lacking vegetation, such as the Sahara, experience extreme daytime heat. This heat leads to turbulence in the lowest 1 to 2 kilometers of the atmosphere, known as the boundary layer. That turbulence can loft dust particles off the ground. So in places like the Sahara, dust storms result not only from abundant dust but also from conditions favorable to throwing the dust into the air.