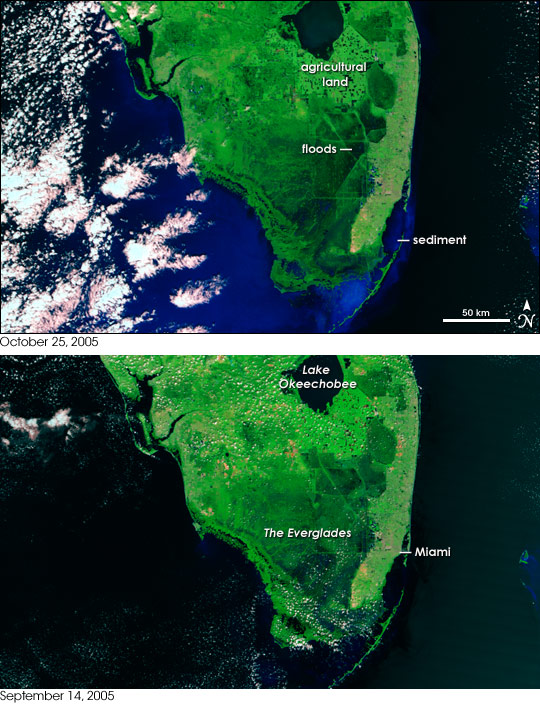 Dark pools of water covered sections of Florida the day after Hurricane Wilma cut diagonally across the state. The patterns of flooding shown in this image are more a reflection of land use than the intensity of the storm. Wilma moved from the Gulf of Mexico in the west, over the Everglades, and then pounded the populated eastern shore as it made its exit into the Atlantic. The Category 3 hurricane brought heavy rain, which caused the inland flooding seen here.

The Moderate Resolution Imaging Spectroradiometer (MODIS) on NASA’s Terra satellite captured the top image on October 25, 2005. Shown in false color to increase the contrast between water and land, the image presents water in black and blue, vegetation in bright green, and clouds in pale blue and white. The lower image, taken on September 14, 2005, shows southern Florida under normal conditions.

The most obvious flooding is in the Everglades, where the wetlands readily soaked up the downpour. Elevated roads form pale strips of green through the wetlands, which are dark with water in the wake of the storm. Between the Everglades and Lake Okeechobee is a lighter green arch of agricultural land. Dark squares hint at the possibility of flooded fields, but the presence of water in a few fields in the September image also suggests that some of the flooding may be intentional.

Along the eastern shore of the peninsula, it is as if someone drew a line to mark out the edge of the wetlands from the pale green, grey, and tan grid of cities, including Miami and Fort Lauderdale. In fact, the line defines the boundary of Everglades National Park in the south. To the east of the park, the wetlands have been drained as cities sprung up. Here, no flooding is obvious, but the image shows signs of run-off. The Atlantic is bright blue, tainted with sediment. The sediment may have entered the water with flood water draining into the sea; it may be from storm-eroded beaches; or it may be sediment from the ocean floor brought to the surface with the churning of the sea under Wilma’s winds. The bright ocean color in the Gulf of Mexico west of Florida is almost certainly caused by sediment from the ocean floor.

NASA images courtesy Jesse Allen, based on data from the MODIS Rapid Response Team and the Goddard DAAC at NASA GSFC