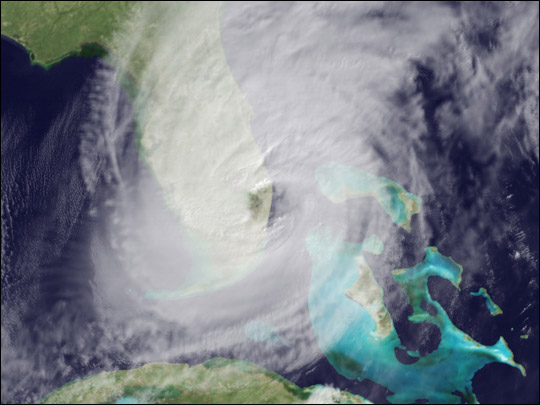 After battering the Yucatan Peninsula over the weekend, Hurricane Wilma finally hit Florida on October 24, 2005. Although Wilma had lost strength while over the Yucatan, the warm waters of the Gulf of Mexico allowed the storm to re-strengthen before landfall. With sustained winds of 125 miles per hour, the Category 3 storm raced across Florida, leveling trees and knocking out power in many communities. Florida’s citrus crop, damaged extensively by a string of recent hurricanes, also faced additional damage from Wilma.

Wilma was the 21st named storm of the 2005 Atlantic Hurricane Season, equaling the number of Atlantic storms in 1933. She was briefly accompanied by Tropical Storm Alpha—a record-breaking 22nd named storm.

This image shows Wilma moving off the Florida coastline at 9:55 EDT (13:55 UTC). It is a frame from an animation of data collected by NOAA’s Geostationary Operational Environmental Satellite (GOES), combined with color land surface data collected by NASA’s Moderate Resolution Imaging Spectroradiometer instrument. The animation displays infrared GOES data at night, and visible data during the day.