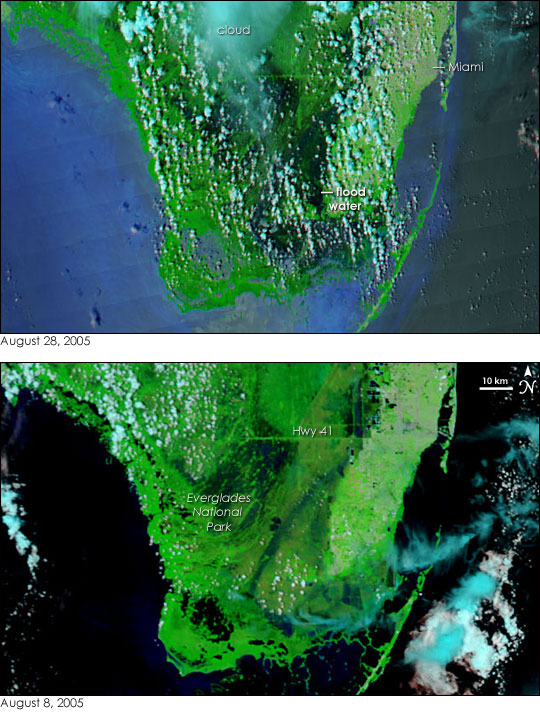 Though still a weak hurricane at the time, Hurricane Katrina dumped heavy rain on the southern tip of Florida on August 25 and August 26, 2005. On August 28, a few clouds lingered over Florida, but the storm had moved away to reveal extensive flooding. These false-color images were taken by the Moderate Resolution Imaging Spectroradiometer (MODIS) on NASA’s Aqua and Terra satellites. In this color combination, water appears black, vegetation appears bright green, and clouds are pale blue and white.

The most visible flooding is in Everglades National Park. The park’s boundaries are clearly visible in the lower image, taken on August 8, 2005. The northeastern boundary of the park is defined by a bright green line formed by the Highway 41 corridor. On the east side of the peninsula, the land is a lighter green where the water has been drained away and the land cultivated. Numerous cities, including Miami, dot the landscape with patches of cement-colored gray. Everglades National Park surrounds the developed land to the south and west and is defined by the deeper green of native vegetation and swampland. On August 28, top, water filled much of the park, but there is little sign of flooding to the east. Extensive flooding was reported in southeastern Florida, but it is not visible in this image.

The effects of Hurricane Katrina on the ocean are clear. As the storm passed, its rains and wind churned the ocean, bringing clouds of sediment to the surface. This sludge from the ocean floor colors the water an electric blue in the top image.

The large images provided above are at MODIS’ maximum resolution of 250 meters per pixel. The MODIS Rapid Response Team provides daily images in additional resolutions.