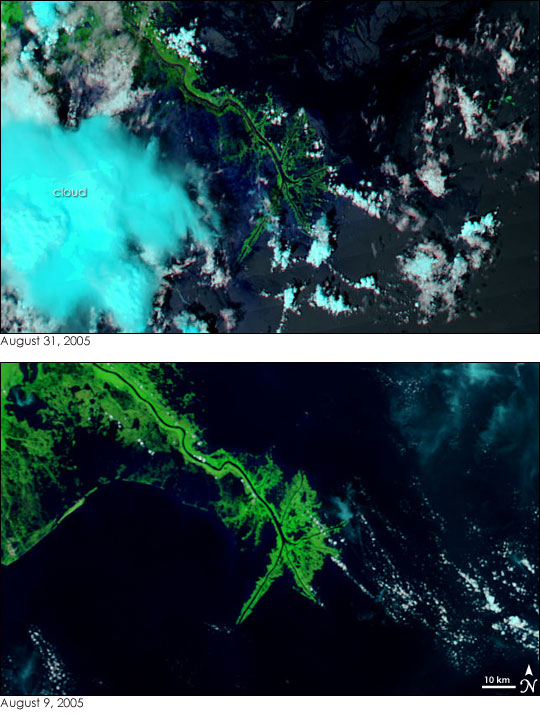 The Mississippi River pours into the Gulf of Mexico through the wetlands of Louisiana. Over millennia, the river has deposited sediment into the Gulf, slowly building the long “crow’s foot” delta seen here. The delta that took thousands of years to build changed dramatically overnight when Hurricane Katrina blew ashore. On August 31, 2005, the Moderate Resolution Imaging Spectroradiometer (MODIS) on NASA’s Aqua satellite captured the top image of the Mississippi River delta. In contrast to the lower image, taken on August 9, 2005, much of the green land is under water. The false-color images show water as black, or dark blue where muddied by sediment, plant-covered land as green, and clouds as pale blue and white.

The changes seen in the delta may be a result of temporary flooding brought on by the hurricane’s powerful storm surge and heavy rains, or they may be permanent if the storm washed away sections of land. The Mississippi River is clearly swollen in the top image, indicating that the flooding caused by the storm had not subsided by August 31. On the other hand, the water around the delta is blue, clouded with dirt. The dirt could simply be run-off from the floods, or it could be eroded shoreline.

The high-resolution images provided above are at MODIS’ maximum resolution of 250 meters per pixel. They are available in additional resolutions from the MODIS Rapid Response Team, which provides daily images of the region.